On This Day 70 Years Ago: Hiroshima is Destroyed by an Atomic Bomb 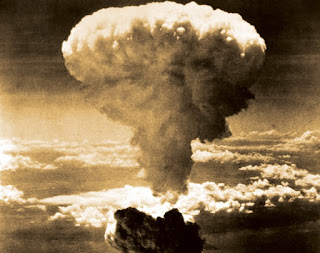 On this day 70 years ago, on August 6, 1945, the world became a much more frightening place. The very first atomic bomb was dropped by a bomber, the Enola Gay, or the United States Army Air Force on Hiroshima, Japan. On August 9, a second bomb was dropped on Nagasaki, Japan. These are the only two times an atomic bomb has been used in warfare.

It is estimated that 129,000–246,000 or more Japanese soldiers and civilians ultimately died from the nuclear explosion and the effects of nuclear radiation afterwards. At least of the total casualties, over 70,000 people, died on the first day of the attack.

The reason for the attack was to hasten the surrender of Japan to the allied forces. The Japanese had already proven that they would fight without surrendering without their emperor's permission. Emperor Hirohito, realizing the enormity of the attack and featuring an attack on Tokyo, personally surrendered on August 15 to the allied forces led by the United States. His own government was opposed to the surrender-- but Emperor Hirohito managed to overrule them. He was able to stay on as a figurehead constitutional monarch after the war.

Historians and scholars generally agree that the two atomic attacks actually saved millions of Japanese and American lives. The Japanese would not surrender, and were planning to fight to the very last civilian.  One military estimate was that an invasion of  Japan would cost 1.7–4 million American casualties, including 400,000–800,000 fatalities, and five to ten million Japanese fatalities. The key assumption was large-scale participation by civilians in the defense of Japan.

Although the bombings are certainly morally debatable, even if the casualties on both sides were only 10% of these estimates, more lives were saved by the bombing than without it.

To find out more:
https://en.wikipedia.org/wiki/Atomic_bombings_of_Hiroshima_and_Nagasaki