Great Second Life Destinations: Linden Lab's Challenging PaleoQuest Game Is Gorgeous-- But Only Use the Official Viewer When Visiting 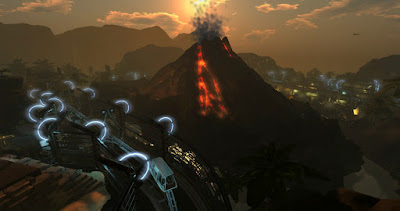 PaleoQuest is Linden Lab's new Jurassic World inspired theme park  It is also a challenging game that, when successfully completed, awards the participant with (according to published information) "valuable prizes and collectables". Keep in mind when reading this post that I am not a gamer, and do not have the patience nor interest in successfully completing a game like PaleoQuest. What I am interested in is photographing interesting and attractive destinations in Second Life, and PaleoQuest quite simply is one of the most gorgeous multi-sim areas ever constructed. It is well worth visiting even if you do not plan to complete the quest.


Image shown above:
This fiery rock-spewing volcano-- surrounded by a working monorail-- lies at the center of the multi-sim PaleQuest region.

You must enter PaeloQuest through Linden Portal Park. Look for the gate that I show above. The Pterodactyl is actually my avatar. I had a great deal of fun squawking at and acting as if I wanted to munch on the many visitors who looked like they would make tasty Pterodactyl snacks. People assumed I was part of the game, and generally appreciated my cold blooded and carnivorous acting abilities. 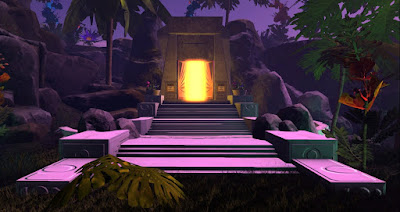 To enter the multi-sim PaleoQuest region, make your way the lushly landscaped walkway until you see the tomb-like structure above. You must make your way through the yellow light

It is recommended on several forums that that you only use the official Second Life before you visit PaleoQuest.  Using another viewer such as Firestorm may require a clean reinstall afterwards - which is what I had to do after a bad crash. See my article published on Sunday for more information: 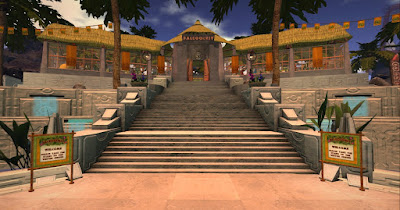 After your teleport, you arrive at PaleoQuest Central Base, which is actually another well designed themepark-oriented build. This welcome area also shows an important instructional video which you can also view on Youtube -- I am showing these at the bottom of this post. This is also a social area with several bars and lounges.  I believe that prizes for successful game participants, which I am not, are distributed  here. 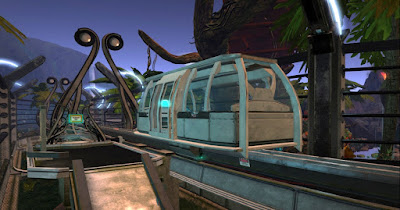 PaleoQuest Central Base is also the main monorail station. The working monorail, which is shielded by an electric barrier which visitors should avoid touching enters the dangerous theme park though a huge metallic gate. There are several stops which you have to navigate your way though in order to successfully complete the game. 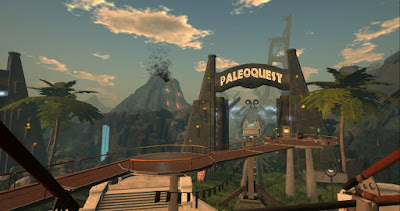 This beautifully designed Egyptian-inspired t underground temple complex was the first stop on the monorail. Navigating your way through it without being killed by poison darts was the first challenge on the quest. I failed miserably at this -- and died at least 15 times before I gave up trying to progress my way to the next challenge. 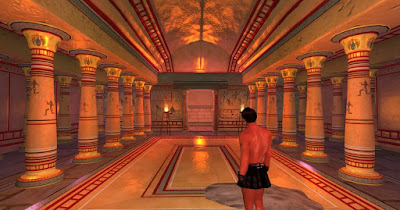 It was very cool to watch my avatar agonize in a gruesome death over and over, and then be transported back to the start area. I also managed to be electrocuted several times, and narrowly missed being grabbed and eaten by a virtual Pterodactyl.  The other challenge areas further along in the game should be as gorgeous and and as well built-- and even more difficult to progress through. 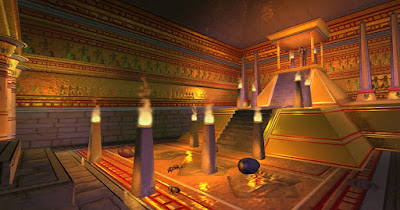 The image below shows another striking feature of PaeloQuest- a collapsed and decaying large-scale replica of San Francisco's iconic Golden Gate Bridge.  Many bloggers and photographers are using this bridge as subject matter -- it is rapidly becoming one of the most photographed structures ever in Second Life.

A quick overview of PaleoQuest is available on the Second Life Website. Take a quick look at this before you visit
https://community.secondlife.com/t5/Featured-News/Brave-Dinosaurs-amp-Win-Prizes-in-PaleoQuest/ba-p/2953695 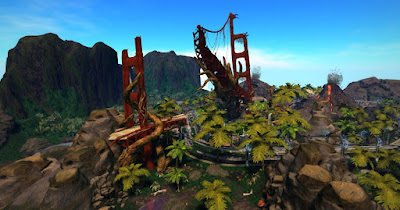 To see more blog coverage and photography check out the following blogs: 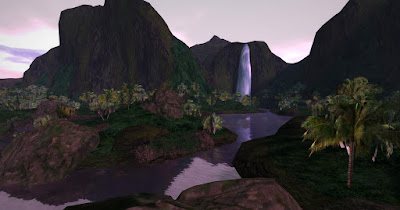 To see a current listing of more gorgeous places to visit in Second Life:


Linden Lab has recently published a tutorial which you should view before visiting. I show this video below: