10 Things You Need to Know About Florida Before You Visit 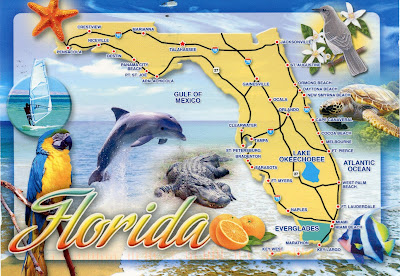 Here are 10 things you need to know about my home state of Florida and Floridians. Many of you are planning to visit here and should find these points interesting. These are in random order.


1. When Floridians mention names like Wilma, Frances, Jean, Charley, and Andrew, they are not talking about people. They are talking about Hurricanes. For example "Do you remember Andrew? He blew everything down around here like crazy, and everyone had to evacuate!" they are not talking about a person. Florida actually rarely gets hit by hurricanes these days, and you get lots of warning when they come, so do not let that stop you from visiting. Hurricane season lasts from June 1 - November 30 and peaks in early September.

2. Despite what you read online, do NOT call white people in pickup trucks with Confederate Flags on them "crackers".  It is not an affectionate term for many.  For example, if there is a pickup truck blocking your way to the gas pump at a gas station, do not yell out "Hey CRACKER would you please move your truck for me?" Not wise at all.

3. Floridians have no problems with Latino culture -- in fact in South Florida (the Miami - Fort Lauderdale Area) most Anglos would not know what to do without good Cuban Coffee and Cuban Restaurants. We generally do not have an anti-immigrant mind set here. Most Anglos in South Florida (anyone who speaks English natively is an Anglo) speak some Spanish without even realizing it -- for example, Hola, Por Favor, Amigo, Manana, Que Pasa?, and Mucho Gracias are interchangeable with English. One more thing -- not everyone who speaks Spanish natively here is Cuban or Cuban American, other Latin American cultures are here too.

4. To a Southern Floridian (Orlando and South) , any temperature  under 71 (22 celsius)  degrees is cool, anything under 63 degrees is cold and requires a jacket (17 celsius), and anything under 54 degrees is absolutely freezing and requires a fire and central heating (12 celsius).  It can get this cold from late November - early March. In the winter, someone from Chicago for example would find a beach with at 54 degrees absolutely summerlike, so do not take a Floridians account of weather seriously. 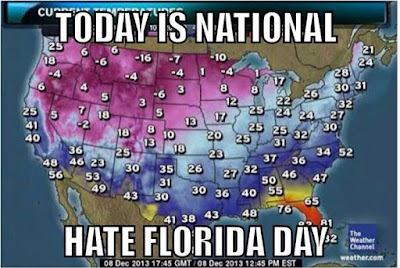 5. Florida cops are nice, but they do not like drivers who routinely speed (over 75 mph on highways) and drive like maniacs, especially near retirement communities. You can and will get a ticket if you drive aggressively here. You also respect the "move over" law on highways here - there are huge fines associated with violating this. Do not mess with the cops. I had a friend visit from California once who drove my car and totally and completely pissed off a police officer with his aggressive driving- I had to talk him out of hauling my friend into the station by explaining that Californians don't know any better.  I am not exaggerating.


6. It rains almost every day in the Summer here.  It will pour rain in Orlando (home of Disney) right when you are outside with four screaming kids after paying $300 bucks for a days admission at Disney attractions for the family. August is especially wet. It amuses me when people from Europe expect warm and sunny days in the summer in Florida.


7. Not everyone is old in Florida. In retirement communities they are, of course, but Florida is very diverse.  Many people tend to be very attractive and well groomed here, especially college students-- Florida Atlantic University where I live can look like a GQ model set. "Grunge" never really happened in Florida.

8. Hotel prices, and even restaurant prices, go way down off season in Florida. Off season is roughly from  June 1- end of October. Restaurants can offer savings also. A hotel room in a five star luxury hotel can be had for as little as $180 a night off season here, and under $80 a night at a three star hotel. Visiting when it is hot and humid outside, and rainy at times, has its advantages.

9. Yes we have alligators here.  They are not particularly vicious and generally avoid humans. They would not be a protected species in Florida if they were a real danger. Although the odds of getting bitten are very rare -- one in 24 million -- they do bite , so do not get close to them to take photographs. I am amazed at all the tourists who get way too close to them for photographs and find them "cute".  Do not feed gators, and do not provoke them - leave them alone. If you want to read more about alligator safety read this article.

10. You still cannot go from Florida to Cuba as a tourist if you are a citizen or foreign resident of the USA.  Unrestricted tourism from the U.S.A. is still illegal and will remain so until Congress lifts an embargo on trade with Cuba-  which is not going to happen before 2017 at the earliest. You must go on an official "cultural exchange" or "humanitarian mission", and go with a group-- every minute of your day must be accounted for. Prices for these tours are expensive, and can run over $3,000 a week inclusive for one person including airfare. People will relatives in Cuba can visit their families, but even this contact is regulated.

Despite news reports, there are no cheap ferries yet from Florida to Havana  - the Cuban government is holding up approval.   Charter flights to Havana are very expensive -- over $500 for a one hour flight round trip from Miami the last time I looked.  In addition, Cuba does not have yet enough hotel rooms for the anticipated demand.  Everyone wants to go to Cuba (80 million United States Citizens want to travel there immediately), but large scale tourism from the U.S.A. there is still a ways off.