On This Day in 1965: Bob Dylan's Most Famous Song, "Like a Rolling Stone", Is Released 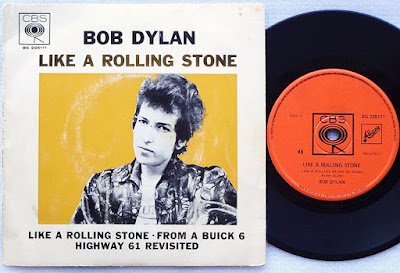 24 year old Bob Dylan released his most iconic song, Like a Rolling Stone, 50 years ago today. The song was relaseed in 1965 as a single, with the  "B" side being  Gates of Eden.  The single quickly reached #2 on the charts behind the Help! by the Beatles, and would be a best seller in many other countries including the U.K. and Canada. The song is considered revolutionary in its combination of Dylan's voice which many considered to be cynical and electric guitar licks. It has been a staple of Dylan's concert appearances over the past 50 years, and is the most widely recognized of his songs today.

1965 would prove to be a very influential year in music.  In 2011, Rolling Stone Magazine ranked Like a Rolling Stone #1 in a listing of the 500 Greatest Songs of all Time. Another 1965 song, I Can't Get No Satisfaction by the Rolling Stones, was ranked second. Other important 1965 releases include three songs by the Beatles, Yesterday (Ranked #13), In My Life (Ranked #23), and Help! (#29). In addition, People Get Ready by The Impressions was ranked #24 - making 1965 a year that 6 songs in the top 30 were released.

To find our more about Like a Rolling Stone:
https://en.wikipedia.org/wiki/Like_a_Rolling_Stone