On This Day 50 Years Ago: Sonny and Cher Release Their Iconic Anthem "I've Got You Babe" 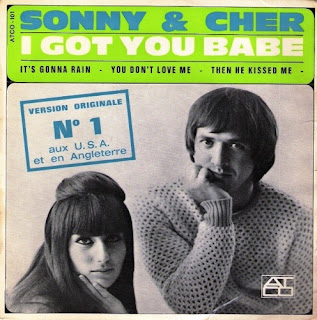 On this day 50 years ago in 1965, Sonny and Cher released their iconic hit, I've Got You Babe as a single from their first album Look at Us. The song is recognized as one of the greatest duets in Rock and Roll history and as a defining anthem of the early hippie counterculture movement. I've Got You Babe would quickly reach #1 on the Billboard Top 100 in the United States, and would go gold and sell over one million copies in a matter of weeks.  The song would also reach the top spot in the United Kingdom and Canada.

Cher sang a version of the song in 2014 on her Dressed To Kill Tour with a video of Sonny and a recording of his vocals. Sonny Bono died in a skiing accident in 1998; he was a popular Republican Congressman from California in the U.S. House of Representatives at the time.

To find our more:
https://en.wikipedia.org/wiki/I_Got_You_Babe


Sonny and Cher singing I've Got You Babe together in 1965