Marty McFly, as many of you who are reading this review already know, is the teenage protagonist of the Back to the Future film trilogy, the first of which in 1985. Michael J. Fox will forever be known for his cheeky and intense portrayal of Marty McFly - one of the most memorable characters from the first century of popular cinema. Back to the Future is still immensely popular-  many cities are currently having special performances of the film accompanied by live symphony orchestras in concert halls around the world to celebrate the 30th anniversary of film's release. 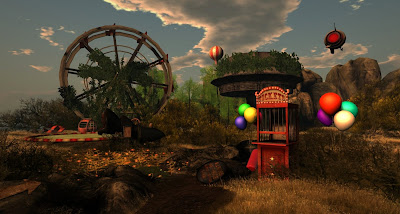 Sera Bellic, who through LICK Sim Designs has created some of the most memorable environments in Second Life, invites residents to find their way back to the future with her latest sim design, The McFly Project.  The arrival area is set inside a circus tent.  Once you exit, you will see what has become a rather ubiquitous in Second Life post-apocalyptic amusement part dominated by a rusted Ferris wheel with a unique realistic touch-- carts strewn around its base.  Strange robotic flying objects which appear to be spying on visitors confirm that you have indeed entered the future. 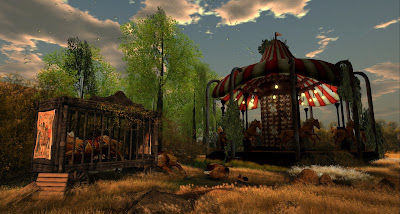 Keep on walking to the back of the part until you see R2D2, the cute robot from Star Wars. If you have your sound turned up, you can hear him -- as well as rather more threatening sounds that come from the strange flying objects overhead. Behind R2D2 is an entry to an underwater bridge which will lead you to directly to a future environment. Before you exit the underwater passageway (complete with a very well done working drawbridge), you may want to ignore the stated advice and proceed inside an underwater control-room complete with monitors and screens that reminded me of the AGIS medical center at Insilico South, a visionary state-of-the-art Cyborg health and wellness facility


One you leave the underwater passageway by ascending a ladder, you will finally arrive at an environment that really looks like the future. Those buggy flying spy robots are still here, but behave in a less-obnoxious fashion. You will arrive in a watery plane (global warming really does melt all that polar ice) and can visit the interior of a futuristic house which humorously contains Rosie the Robotic Maid from the 1960's cartoon The Jetsons, and a cool looking skybar glowing in purple light. That leaves three unique environments to visit in the  McFly project, and three unique views of the future that you travel back to as viewed in the popular imagination.

The McFly Project is one of Sera Bellic's most unique builds, and is highly recommended for a visit.
Make sure to have your sounds up when you visit to take full advantage of the simulated sound effects.

Here is the SLurl to the destination:
http://maps.secondlife.com/secondlife/Oyster%20Bay/6/135/33

To see more blog coverage and photography from The McFly Project: 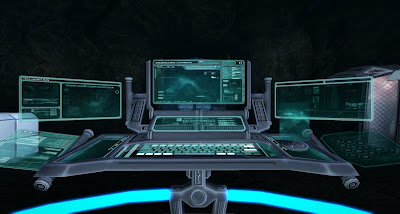 To see my 2015 Reviews of other excellent LICK builds which preceded The McFly Project at this location:

April 2015:  The Apocalypse Arrives --  "The End of the World as We Know It"
http://www.eddihaskell.com/2015/04/great-second-life-destinations-live.html 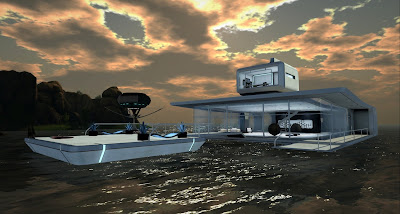 Lick - The McFly Project  is currently a Second Life Destination Guide Editors' Pick. You can check out other recommended destinations here:
http://secondlife.com/destinations/editor 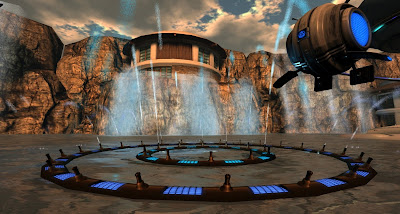 To see a current listing of more gorgeous places to visit in Second Life: