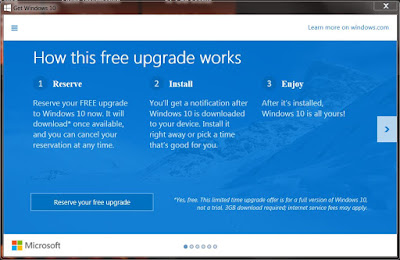 On Friday May 29, here on this blog, I wrote about the upcoming launch of Windows 10, and how Windows 7 and Windows 8.1 users would shortly be offered a free upgrade. I also wrote that Microsoft may be attempting to extract a monthly fee out of Windows users for privilege of continuing to use Windows 10.

Well what I predicted is coming true. Last night, I noticed this little windows icon on my toolbar -- look on the left:

Upon examination, it was a reservation for a free Windows upgrade which I accepted. By the way, the little Icon does not go away after I accepted the reservation, I hope it is not now a permanent part of my desktop!

But look closely at the upgrade confirmation-- the following line is included:

Now, I can see Microsoft eventually wanting me to pay a one-time fee to keep Windows 10.  It might be as much as $100; this is what I would have to pay  for a  new version of Windows, and I can  see Microsoft justifying this.

But here is the rub -- if Microsoft is moving to a monthly subscription services, and if a monthly fee is over five dollars , I am not paying it. I will move to a Mac or a free open source operating system like Ubuntu as a replacement.

I am going to predict that Microsoft will not move Windows to a paid subscription anytime soon, if at all. They have committed to keeping it free for twelve months. But trying to charge their current user base a whole bunch of money for something that traditionally was included in the price of a computer or pad device is something that they will not tolerate.

For an update on Windows 10 published on Monday, June 1 confirming a July 29 ship date: