The Countdown to Marriage Equality in all 50 United States Begins 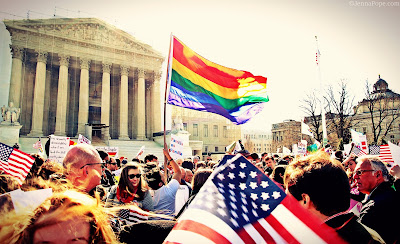 The countdown to the Supreme Court of the United States (SCOTUS) ruling on Marriage Equality in all 50 states has begun.  Right now, about 75% of all citizens of the United States of America live in areas where same-sex marriages are legal. A positive SCOTUS ruling would  extend this basic human right to all Americans.

A SCOTUS decision against marriage equality could conceivably roll back marriage equality in states which have been awarded this by lower federal courts  -- such as Florida where I live. Every state where lower Federal Courts have declared marriage equality as constitutional could reinstate older discriminatory laws with impunity. This could set the gay rights movement back a decade.

The Supreme Court will probably issue their ruling on a Monday or Thursday before July 1, beginning at about 9:30 a.m.. All decisions must be announced by the end of June, before SCOTUS ends its current term. (Note: they could issue their decision on any other day of the week, but this is unusual). They will almost definately issue their decision by Monday, June 29 -- two weeks from today.

In addition to marriage equality, another huge case on the future of Obamacare health subsidies, King vs. Burwell, is also due to be announced. Several also important cases remain to be decided but these two are the most prominent.

The SCOTUS blog will begin a live broadcast at 9:30 a.m. here on Monday morning, and have announced that they will also be issuing orders (rulings) on Thursday, June 18.. I suspect though that we will need to wait at least another week before we hear anything -- SCOTUS likes to keep their audiences in suspense on blockbuster decisions until as late as possible.