On This Day 800 Years Ago: The Great Magna Carta, The Foundation of Modern Democracy, Signed By King John at Runnymede

The great Magna Carta (Latin for Great Charter), the most important single document in the history of modern democracy in English speaking countries, was agreed to and signed by King John in the presence of 25 rebel barons at Runnymede in Surrey, England 800 years ago today. 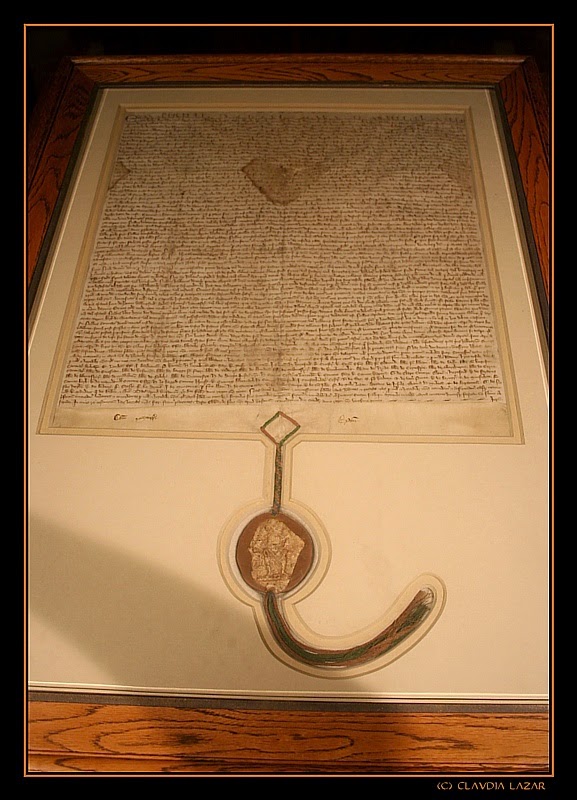 The Magna Carta is a cornerstone of modern democracy, and more specifically, the British Parliamentary system and those of her former colonies. It inspired the Declaration of Independence and Constitution of the United States of America. It established for the first time the principle that kings, as well as subjects, are subject to the rule of law, and that due legal process may never be denied any free individual.


Remarkably, the following clause from the Magna Carta is still in effect in the United Kingdom today, 800 years after it was written. It's powerful words resonate today.

NO Freeman shall be taken or imprisoned, or be disseised of his Freehold, or Liberties, or free Customs, or be outlawed, or exiled, or any other wise destroyed; nor will We not pass upon him, nor condemn him, but by lawful judgment of his Peers, or by the Law of the land. We will sell to no man, we will not deny or defer to any man either Justice or Right.

It would take another 434 years and the beheading of King Charles 1 in 1649 for the idea of parliamentary superiority over the monarch to firmly take hold in Britain. The concept of the divine right of kings, which the Magna Carta challenged, would last until 1917 in Russia and 1945 in Japan, and is still accepted as law today in Saudi Arabia and other absolute monarchies most notably those in the Middle East.

King John would ultimately ignore what he agreed to in the Magna Carta, which leads some to debate how important this document actually is in the developments of modern law. But the important thing is that, for the first time, the right of the monarch to rule absolutely accountable to no one was made illegal.


One interesting note -- I lived literally across the street from Runnymede in Egham, Surrey, England for a period, which is located a few miles from Windsor, right near the monument shown above. People would think I was joking when I told them I could see Runnymeade, which is a park, outside of my kitchen window. But the place really exists and the rather mundane town of Egham, which bills itself as the birthplace of democracy, will be partying to the rafters today.

To find out more about the Magna Carta:
http://en.wikipedia.org/wiki/Magna_Carta

To find our more about events celebrating the 800th anniversary:
http://magnacarta800th.com/events/

Here are two short videos on the Magna Carta. I really like the first one since it uses such grand and portentous music, and the narrator speaks in what is called "received pronunciation" English, which is out of fashion and considered very effete and stuffy these days.