46 Years Ago Tonight: The Stonewall Riots Launch the Modern Struggle For LGBT Rights 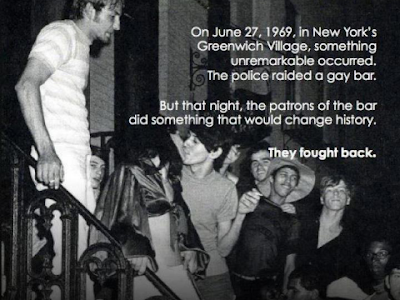 Tonight is the 46th anniversary of the single most significant event in the Gay, Lesbian, and Transgender Rights Movement, Stonewall Day, which honors those who stood up for Gay Rights today in Greenwich Village, New York, in 1969. Large numbers of LGBT individuals stood up to police brutality and fought back as hard as they could. Many were injured and arrested. We celebrate their bravery and gumption tonight, and tomorrow as Gay Pride Day.

What many people do not know is that Judy Garland's funeral occurred earlier that evening on June 27, -- leaving the crowd in a bad mood. Judy Garland was a gay icon (she still is) and publicly supported gay people way before it was fashionable to do so.

On that night, the patron's of the Stonewall Inn, a mafia run dive that served overpriced drinks, were simply were not going to take police harassment anymore.  Although this story might be apocryphal, I think it makes sense, although some at the riot said this had nothing to do with all the pent up anger and rage that exploded that night.

According to legend, some drag queen, who was mourning the death of Judy,  could no longer take police brutality and decided to fight back as he was being insulted and shoved into a police van.  He then threw a fist (or a beer bottle) in the policeman's face. The policeman then threw him to the ground and almost killed him by kicking him in the head.


Other accounts say that a butch lesbian threw the first punch.  Whatever did happen, this ignited an explosion that set Greenwich Village rioting for three nights. Patrons in the bar fought back with everything they had. The crowd outside then quickly grew in number to over 1000 and started fighting back. And they fought back hard -- the police were shocked that gay men, thought as effeminate, could cause such a riot.


The cops who raided the Stonewall had to lock themselves inside the bar to protect themselves. Some people then tried burning the bar down with the cops inside with lighter fluid. Other people were so angry at the abusive treatment that the cops were inflicting  that they took parking meters out of the ground and tried to hammer the Stonewall doors open in an effort to get at the cops. We are talking a violent riot here. People were simply not going to take this anymore. Although I am not one who condones violence, sometimes it is necessary.

Not soon after, a big crowd drove the police out of the West Village by doing things like turning over police cars and throwing punches back at the police. The rioting did not stop and lasted a few days. The cops were so frightened they learned to back off. Things have never been the same since.

Now, there were riots in other parts of United States in other cities when Police harassed gays. The Compton Cafeteira Riots occurred in San Francisco in 1966. And, gay rights were more accepted in parts of Western Europe before that time. But, the Stonewall Riots was a big event, achieved media recognition, and served as an incubator for other protests. It has been marked every anniversary since with parades and other events.

One year later, the first gay rights parade commemorating the Stonewall riots was held in New York. Over 15,000 people turned out. Never before have that many LGBT individuals turned out for a public event. As someone famously said, the closet door was ripped open that day and never came back on. We for granted the fact that we can go to gay establishments, purchase gay publications, publish things like this blog, and in much of the world, have increasing degrees of legal rights, including the right to marry in an increasing number of nations.

But lets go back 46 years. I am taking this from Wikipedia:


The situation was better in some parts of the world, most notably Western Europe. The UK decriminalized homosexuality in 1967. But we would be shocked today to go back in time and see how dangerous it was to be out of the closet.

Many people today hate "labels". They realize that many people, perhaps a majority, are "bi" to some degree and may think that those interested in gay rights are a rather old fashioned political minority who need to "get a life" and stop thinking about the past.

The point is we need to celebrate the actions that our predecessors - and probably some SL Residents - took at the time, which gave many (but not all of us, we can still be murdered for being gay in countries like Iran) the freedom that we today. So go out and party, and think about what things could have been like if some drag queen did not tell some obnoxious cop to fuc_ off because of Judy Garlands funeral earlier that day.

Note From Eddi: I take much of the information from this post from other posts which have run in this blog on Stonewall Day in prior years. Things have changed so much in the past few years -- we celebrate Marriage Equality in all 50 of the Untied States Today!