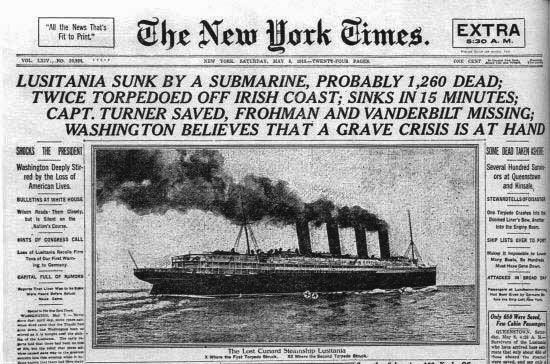 On this date in 1915, during the First World War, the magnificent British ocean liner Lusitania was torpedoed and sunk on a voyage from New York to Liverpool by a submarine of the German Navy. 1198 passengers and crew members were killed, including 128 Americans. Public opinion in the United States was outraged at this sinking and moved from neutrality to that of being decisively anti-German.

The sinking of the Lusitania, together with the infamous Zimmerman Telegram sent by Germany to Mexico in 1917, were the two primary reasons the United States entered the First World War on the side of the Allied powers, including Britain and France. Germany offered Mexico Texas and the American Southwest if she were to go to war against the United States. The Mexican government ignored the German offer.


The Germans sunk the Lusitania without any warning to the passengers and crew, violating the Cruiser Rules, an agreement between naval powers which said that unarmed passenger ships would receive a warning of a sinking so that life boats could be launched to save civilian lives. Germany was effectively demonized in the minds of the American public and world opinion as a result.

This event was a huge news story in the United States. The headline of the national publication of record, the New York Times shown above, shows how important this story was in the press, and the level of outrage that resulted.

To find out more:
http://en.wikipedia.org/wiki/RMS_Lusitania