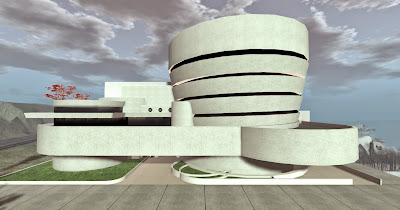 There is no more iconic American architect than the great Frank Lloyd Wright. Wright designed more than 1000 structures in his lifetime (1867 - 1959), 500 of which were actually built. He pioneered the concept of organic architecture, emphasizing local materials and natural shapes which take their lines from the landscapes in which they are situated. Wright's buildings and core design messages were prescient in terms of emphasizing sustainability and are just as relevant today as they were 100 years ago. 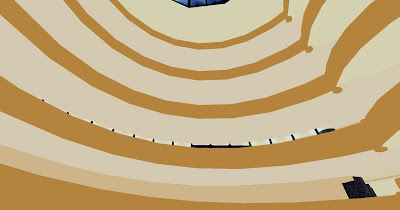 Wright's two best-known buildings are Fallingwater, a magnificent home in Western Pennsylvania which was completed in 1939 and which, as its name implies, is situated above a waterfall, and New York's Guggenheim Museum, a well known modern art museum that was finished in 1959 and situated on the Upper East Side of Manhattan. They both can be visited today and are two of the best-known modern architectural destinations in the world. Reinforced concrete, which by itself is not perceived as a romantic or particularly noble building material, effectively serves as the central building material for both buildings which make best use of its ability to assume free form organic shapes. 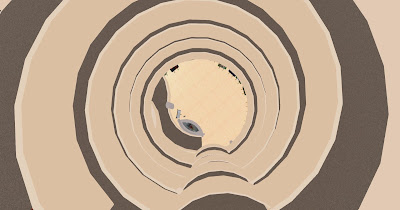 There have been at least two outstanding reproductions of Fallingwater in Second Life over the years. One was located on the campus of an older Frank Lloyd Wright museum which is no longer standing -- and which I photographed for the 2009 issue of VR Style Magazine, photography which I show below. I used to be the Chief Photographer and Creative Director for this publication which is no longer published.

Inara Pey, who blogs at Living in the Modern World, built a superb rendition of Fallingwater in Second Life, you can see it her work on YouTube.  Inara moved her Fallingwater to Kitely in 2012; Austin Tate reviewed this last year and it is simply superbly designed and visualized.  Honour published an article on this last year: 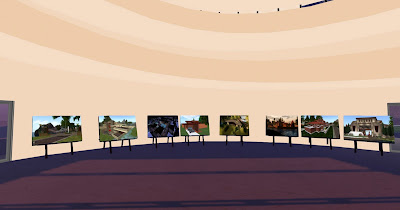 I was unaware of any Second Life attempt to reproduce the Guggenheim until last week, when I visited the town of Piccolo on the ground level of D-Lab. which Yana reviewed on her blog. As I was checking out the surrounding builds on the hectic Second Life mainland, including the nearby Hotel Chelsea, I noticed a beautifully built virtualization of the Guggenheim!  When I visited, I saw that this structure was actually the Virtual Frank Lloyd Wright Museum. I do not know the age of this structure, or if the Breeze club located across the museum and built in a Frank-Lloyd Wright style is still active-- but was delighted to be able to visit a well done virtualization of this Frank Lloyd Wright masterpiece. 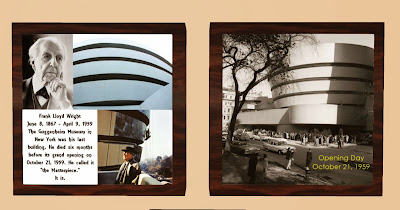 The Virtual Frank Lloyd Wright Museum, curated by Frey Bravin, has a limited number of real life and Second Life photographs and exhibits to appreciate. To its benefit, it does not overwhelm with a huge amount of textual information; you can check out the web links here if you would like additional information. What it does do is let the visitor appreciate the organic spiral forms and reflections of light that make the Guggenheim art museum such a wonder of modern architecture. Walk down from the top of the museum and look at the skylight above (restored at the Manhattan Museum) and the atrium below. This is an excellent build and one of the hidden gems of Second Life design. Make sure to visit this highly recommended destination and check out the neighboring D-Lab Sky Garden while you are at it. 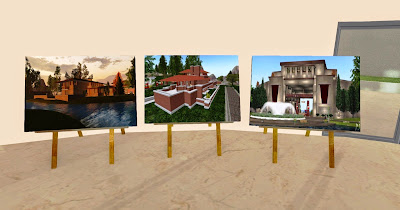 
To see more places to visit in Second Life:
http://www.scoop.it/t/second-life-destinations


A version of Fallingwater is sold on Second Life Marketplace as a residential dwelling:
https://marketplace.secondlife.com/p/GG-Fallingwater-house-furnished-600-animations/7034274 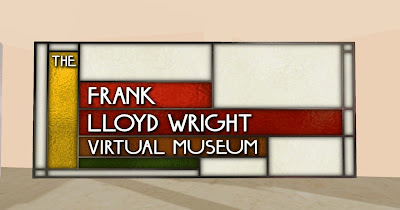 
In October 2009, I took these photographs for an article in VR Style Magazine on the large and very well done Frank Lloyd Wright Museum that existed in Second Life at the time.  Several of these virtual buildings are shown in the current museum.