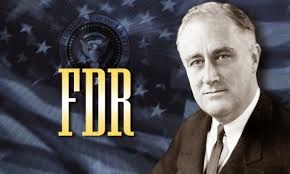 On this day 70 years ago, on April 12 1945,  President Franklin D. Roosevelt (FDR) would die from a cerebral hemorrhage in Warm Springs, Georgia. Vice President Harry Truman would  become President on his passing.

FDR was the only President to have won four elections.  He started his fourth term on January 20, 1945. He led the United States through The Great Depression, started the Social Security Program which guaranteed those over 65 a pension, and led the United States together with Great Britain and The Soviet Union to victory over Germany and Japan in World War 2, which would formally end in Europe the next month on May 8, 1945  It would end in the Pacific with the surrender of Japan in August. 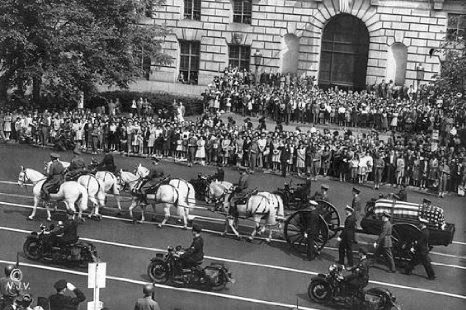 FDR is generally ranked by historians as one of the three greatest, together with George Washington and Abraham Lincoln.

The outpouring of national grief at the death of FDR saw an unprecedented outpouring of grief. There was not a State Funeral for Roosevelt since the USA was still at war at the time, but still a moving procession through Washington D.C. and a memorable train journey from Georgia to New York which  hundreds of thousands came out to view.

FDR's nemesis, Adolf Hitler, would commit suicide 18 days later on April 30, 1945 as the Red Army approached his bunker in Berlin.

To find our more about FDR:
http://en.wikipedia.org/wiki/Franklin_D._Roosevelt

This is an interesting video.  FDR was paralyzed from the waist down in the 1920's from the dreaded polio virus. A vaccine for the virus was not available  until 1953. FDR,  incredibly, was elected Governor of New York and President of the United States with this condition --most people had heard about this, but never realized thought it was a problem for him since he appeared vigorous (until his final years) and smiled all the time. FDR learned to hold himself up with crutches when he spoke and even could drive a car with special controls.

What is so interesting about this is that his disability, by agreement with the news media, was very much under emphasized. He was never shown in a wheel chair in public photographs or movies at the time. It took his death for the world to fully realize this. But this video acknowledges this and shows others in wheel chairs lining the route of his coffin leaving Warm Stprings, a rehabilitation center he funded for himself and others, clearly for all to see. I do not think that in this age, with phone cams and instants news transmission, that someone that was disabled like this could be elected President.