The Theater on the Hill's Production of Act III 3 of Wagner's Great Opera "Die Walküre" Is A Spectacular Artistic Achievement - Next Performance Set for Sunday, March 29 at 12:00 PM SLT


I saw a preview performance of Richard Wagner's great opera Die Walküre (The Valkyrie) that was moving and spectacular earlier this evening at the Theater on the Hill.  Die Walküre, the second of Wagner's epic Ring Cycle which is composed of 4 separate works, is the most accessible and often performed.  The production's set design and special effects set a new standard of excellence for the performing arts in Second Life. The stage acting is convincing and matched the superb version of the Opera itself that is played and sung in it's native German,. This is a performance that anyone who appreciates the fine arts or great special effects simply must see.

Let's begin with the first tremendous special effect. The opening of Die Walküre, The Ride of the Valkyries,  is one of Richard Wagner's two most recognizable works, together with his Wedding March and Bridal Chorus from the opera Lohengrin.  You know this piece-- it provides the background music for the helicopters in Francis Ford Coppola's iconic move Apocalypse Now. This music is the introduction of the motif for the Valkyries who are the daughters of the King of the Gods, Wotan.  The Valkyries were created to fly over battlefields to touch the bravest of soldiers with their swords to accompany their death. The Valkyries then fly the souls of the warriors to Valhalla, the sky castle of the Gods,  where they will stand guard for eternity.

In order to so this scene right, the Valkyries should be on flying horses.  This scene  has challenged every Walküre set designer since its first performance at the National Theater in Munich in 1870. It is simply impossible to do correctly. Opera singers are rarely acrobats, and will get airsick if they are flown around the stage at a convincing pace.. The Seattle Opera attempted this in their 1985 production, but the "Valkyries" looked as is they had motion sickness and were petrified of falling of their horses. You can see this attempt below:

The Theater on the Hill's performance handles this scene effectively, so good, in fact, my mouth dropped. The audience is told to pan their camera's up, and the flying Valkyrie's appear on fiery  horses. Their glow pierces though the nighttime mist- you can see this in the first photograph above. The effect is stunning and convincing, and to a fan of this opera like myself, totally enjoyable.

This opera is accompanied by English subtitles.  This is what great opera houses do, and whoever did it in this production spent a huge amount of time putting it together. The performance lasts for about an hour and 15 minutes, which gives you some idea of the large amount of work it took to do this.
.


The three main protagonists of Die Walküre did an excellent job. Joining Brunhilde (played by Oliver Elton), and Sieglinda (played by Yanneck Docherty) is a very convincing Wotan played by Silvano Korobase. Silvano looked the part, his outfit made him appear as a character of Norse mythology, which The Ring Cycle is based upon. All the costumes were very well done and contributed greatly to the overall atmosphere of the production

Now, lets get back to the final great special effect, and the most beautifully sung and emotional part of the opera. Without having to write the entire synopsis of  the opera, Brunhilde is punished for disobeying Wotan's command by being sentenced to fall asleep for many years on top of the mountain until she is rescued by a mortal man. She asks her father Wotan to shield her from only the bravest of mortals, which he does by surrounding the mountain with magic fire.

This effect makes or breaks opera performances. This effect was handled magnificently in the Theater on the Hill's performance.  Flames, lit by the God of Fire Loge, rise up slowly and ultimately engulf the entire mountain.   There is very famous music, Magic Fire Music, which dramatically ends the opera.

Die Walkure will open it's first regular performance at The Theater on the Hill this Sunday,  March 29 at 12:00 PM SLT. Future performances are planned for April. The production will start of time so be early for a good seat.

Please remember to contribute to the venue if you can. to help offset the costs of the production.

The Theater on the Hill is located here:

Bock McMillan has done a very good write-up of the opera here which you can go to for more information:

Here is the third act in it's entirety with English subtitles if you would like to hear the opera before the performance. 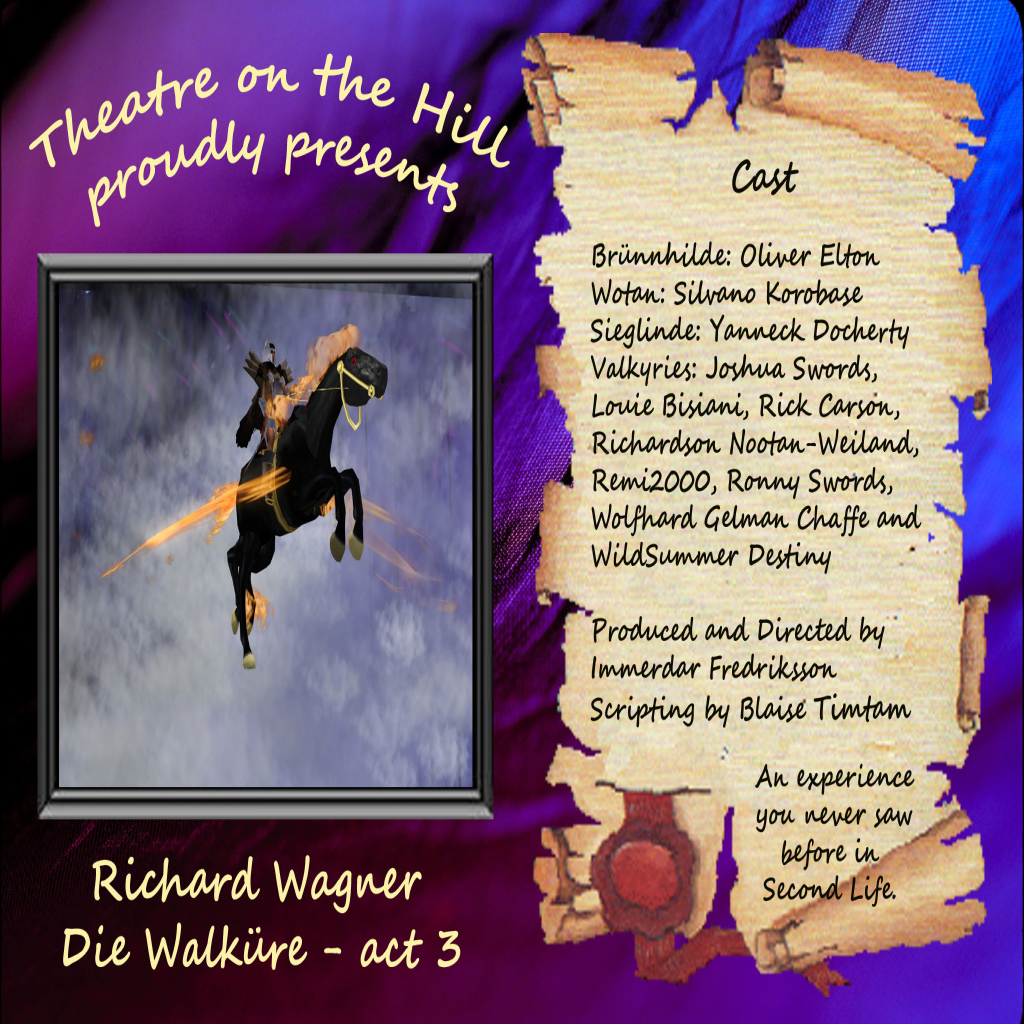