Background of the Second Inaugural Speech:

The bloody American Civil War, which President Lincoln guided the Northern side to victory and kept the United States together, was just about over, with the North achieving victory. The brilliant Southern general, Robert E. Lee, who is revered today throughout the United States, would surrender at the Appomattox Court House in Virginia on April 9. Slavery, already banned in the Southern states,would formally end as an institution in the United States later in 1865.

An estimated 620,000 - 750,000 American soldiers on both the Northern and Southern sides lay dead. with over 400,000 being severely injured. Thousands of civilians also lay dead. The population of the United States was 10% of the total today, or about 31,400,000 people. One estimate of the death toll is that ten percent of all Northern males 20–45 years old, and 30 percent of all Southern white males aged 18–40 perished.  It was a bloody and brutal conflict, and hard feelings remained on both sides. 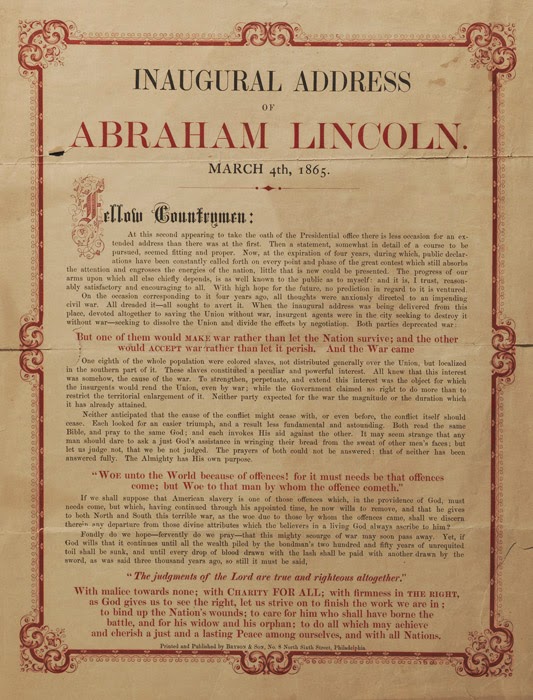 President Lincoln was reelected in November 1864 in a landslide victory.

Here is his problem- Many on the Northern Side wanted to take revenge against the South. President Lincoln did not want revenge. He wanted his United States to heal the wounds of war as quickly as possible.  How would he do this?  Once again, as he did in his immortal Gettysburg Address which I wrote about here in 2013, he turned to his powers of writing (note sources report Lincoln was not a dynamic public speaker, his words were what counted).  This one sentence, at the end of the address, in which he called for love and healing on both sides, is what we remember today:

With malice toward none, with charity for all, with firmness in the right as God gives us to see the right, let us strive on to finish the work we are in, to bind up the nation's wounds, to care for him who shall have borne the battle and for his widow and his orphan, to do all which may achieve and cherish a just and lasting peace among ourselves and with all nations.


The nation would heed his call, and the North gave the South great leeway, with the era of Reconstruction lasting 12 years. The President of the Southern Confederacy, Jefferson Davis, would not be tried as a traitor but left alone, as were most of the leaders of the South. Unfortunately, the freed slaves would be a casualty of this hands-off policy and not achieve true freedom in the South for 100 more years.

Canada, which would not become a separate nation from Great Britain until 1867, also benefited from Lincoln's call for peace. The British government supported the South in the war, in the hopes of splitting apart the emerging colossus that the United States would become by providing weapons and material support. They even came close to entering the war on the side of the South early on -- even though the British Empire already had formally ended slavery.

The Army of the United States could have easily headed north and overrun Canada -- it was the largest and best equipped in the world in 1865, and could move rapidly via  rails.  Some wanted to expand the United States by doing this -- but President Lincoln wanted peace for all on the North American continent, and stopped any possible invasion.

You can read more about the possible invasion of Canada here:
http://theslaveholderswar.blogspot.com/2013/02/what-if-american-invasion-of-british.html

You can read more about the Second Inaugural Address here:
http://en.wikipedia.org/wiki/Abraham_Lincoln%27s_second_inaugural_address 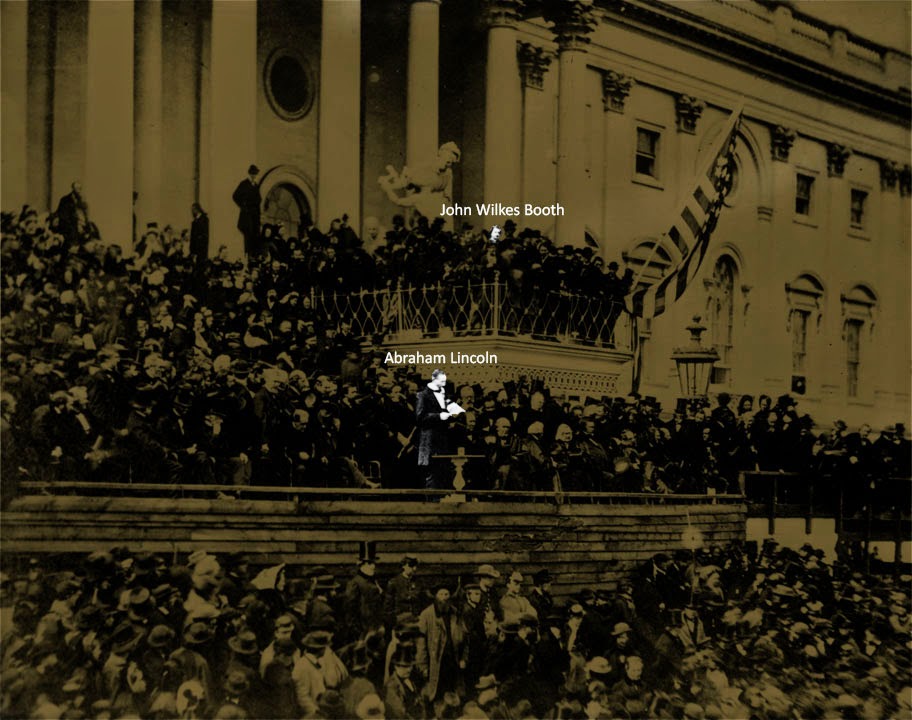