Classic Cinema: The Sound of Music Premiers 50 Years Ago Today 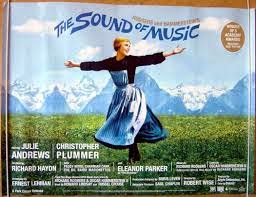 The Sound of Music, one of the most loved movie musicals of all time, and Dame Julie Andrews' penultimate role, premiered 50 years ago today. The film,which is based on the lives of the Trapp Family Singers  escaping Nazi Austria in 1938 - is an adaptation of the 1959 Broadway musical of the same name. It is arguably the most famous work of  the famous team of songwriters Richard Rodgers and Oscar Hammerstein II,

To find our more about the Sound of Music:
http://en.wikipedia.org/wiki/The_Sound_of_Music_(film)

The Sound of Music has the number 4 all-time ranking in the American Film Institute's most recent ranking of the 100 best movie musicals of all time. Julie Andrews has a lead role in 3 of the top 10 musicals, the other two being two 1964 musicals --  Mary Poppins (#6) and My Fair Lady (#8).  Judy Garland also has three top-10 musicals to her credit.

#4 (Julie Andrews in 3 of the top 10)
http://en.wikipedia.org/wiki/AFI%27s_Greatest_Movie_Musicals


My favorite song from the movie is "Climb Every Mountain", especially as sung by the Mother Superior in the beginning of the film.  I think it is very inspiring.  Peggy Wood played the part and was nominated for both the Academy Award for Best Actress in a Supporting Role and the Golden Globe Award for Best Supporting Actress – Motion Picture of 1965 for her performance. Her singing voice was dubbed by Margery McKay. Who wouldn't want to enter a convent with a Mother Superior as nice as this?

If you did not hear Lady Gaga's tribute to the Sound of Music at the Oscars you need to. She "nailed" it and even Julie Andrews who came out as a surprise at the end was impressed.  This performance, and John Legend's performance of the Selma song "Glory" were highlights which redeemed the Oscars this year.


Did the Sound of Music End the Cold War?

There is an remarkable story concerning The Sound of Music which may or may not be true. At the 1984 Reykjavik Iceland Summit between Ronald Reagan and Soviet Leader Mikhail Gorbachev, the number one issue on the table for discussion was the United States "Star Wars" Missile Defense System. The system, if developed, would have rendered the over 3,000 nuclear missiles of the Soviets obsolete. It would have shot them right out of the sky, and the Soviets knew that they never could develop anything comparable.. In actuality, it was all a ruse -- Stars Wars would have never worked -- but it still scared the heck out of Gorbachev and his military.

Reagan and Gorbachev actually agreed to ban ALL nuclear weapons at the 86 summit. Not some, but all.  They wanted a nuclear free world (which their generals would probably never allow). The Soviets agreed to it under one condition -- that the Americans give up all Star Wars development. Reagan offered to share the technology with the Soviets, but they were not buying this.


Reagan told Gorbachev he needed to think about it and would let him know the next morning. His answer was ultimately no -- he would not give up Star Wars!  The Soviets were angry but would eventually agree to arms control,  Their world would begin to unravel over the next five years as the Communist Block knew it could never compete with the West in advanced technology.

How does the Sound of Music fit into all this?  Reagan later told everyone that he watched The Sound of Music that night, which was his favorite movie,-- and that this helped him become resolute in his decision to build the missile defense. I actually can see this happening -- President Reagan was very sentimental, and was a good actor at the same time-- he both charmed and scared the hell out of his adversaries. I still cannot figure out if Reagan was a simpleton who happened to be in the right place, or a genius who knew how to manipulate people. I tend to think the later. But whatever the case, this is the story, and the feel-good movie Sound of Music may have saved the world.