One This Day 100 Years Ago: Enemies At Peace During The Christmas Truce of 1914 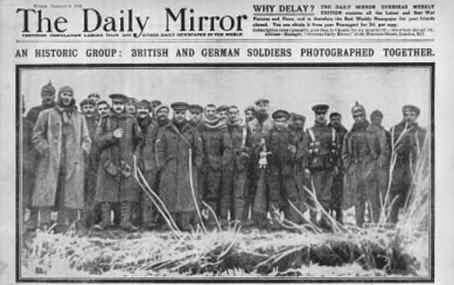 100 years ago tonight, during one of the bloodiest conflicts in history, World War 1, an amazing thing happened. British and German soldiers stopped shooting at each other from the trenches. and greeted each other with singing and greetings of peace during the incredible Christmas truce of 1914 along the Western front in Belgium and France.

Reports are that the German soldiers were the first to stop shooting. They  lit Christmas Trees for the British forces to see, and started singing Christmas carols. The British soldiers joined in. The two sides walked across "no-man's land" separating the two sides on Christmas day, shook hands, and even played football with each other. Photographs show the friendly spirit that prevailed that day.

Pope Benedict called for such a truce in 1914 but was ignored. The truce that took place was spontaneous between enlisted men on each side. The generals on both sides were outraged at the Christmas truce, and forbid their soldiers from doing it again. In 1915 and 1916, some truces broke out -- but the use of mustard gas by both sides, with the Germans doing the first attack, stopped any such truces in the future.

Sainbury's, a British department store chain, made the story of the Christmas Truce their holiday video for this year. You can see it below.

To find out more:
http://en.wikipedia.org/wiki/Christmas_truce