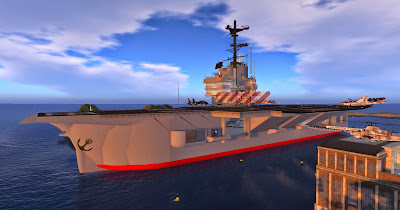 The USS Nimitz, designated CVN-68, is the lead ship of 10 supercarriers which are now in service with the Navy of the United States of America. I was delighted to discover the Second Life Nimitz by accident on one of my discovery treks -- I had no idea a modern warship of this detail and realism existed in Second Life.  The Nimitz's flight deck has realistic landing lights, and the ship itself has great detailing, making the Nimitz a must-see destination for military and aviation buffs. The only other warship that is equally as impressive in Second Life is the Japanese Battleship Yamato, the largest warship ever built through the end of the Second World War.

The modern military aircraft on display on the flight deck, and in the hangar hold beneath, are very well done- they are the most detailed military aircraft I have found in Second Life. Aircraft from the United States and other world air forces is on display, even though only Navy and Marine Corp aircraft would be found onboard the actual ship.


You are welcome to land your own aircraft on the Nimitz's flight deck.  The Nimitz is based at the
US Joint Air Station Blake Sea.   This SLURL puts you right on the flight deck of the Nimitz.

To see more photography of Ryce aboard the Nimitz check out my earlier post here:
http://eddihaskell.blogspot.com/2014/11/second-life-photo-of-day-lieutenant.html

To find out more about the 10 Nimitz class supercarriers in service with the United States Navy:
http://maps.secondlife.com/secondlife/Terric/190/117/41

To see my review and photography of the Japanese Battleship Yamato, the largest warship built during the Second World War, and also taking up an entire Second Life sim:
http://eddihaskell.blogspot.com/2014/08/great-second-life-destinations-yamato.html

I also ran some photographs of the Yamato here earlier today.