Congratulations, Florida! Marriage Equality Comes To The State on January 6, 2015 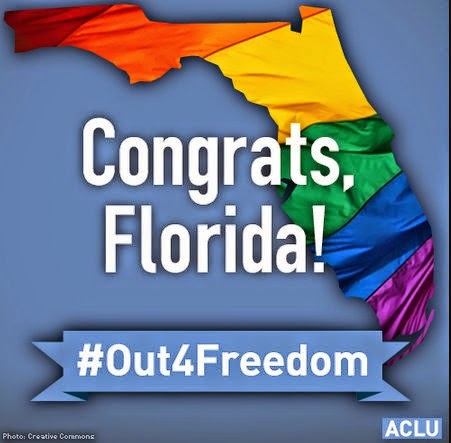 Congratulations are in order for my home state of Florida. Marriage Equality will be effective here on January 6. 2015. The U.S. Supreme Court (SCOTUS) has refused to stop marriage equality from beginning here by not granting a stay on a lower court decision favoring marriage equality last evening.  SCOTUS did not actually rule in favor of marriage equality but is not stopping it from proceeding.

However, confusion remains, due to conflicting guidance and incomplete court orders on the issue.   The actual details are going to be worked out over the next two weeks. It might take another ruling or two to get the order underway in all parts of Florida.

Key West will be partying straight through New Year's with today's decision, making the famous drop of the high heel on the stroke of Midnight with performer Sushi all the more merry on New Year's Eve!

Update:  The home counties of Miami, Key West, Tampa, Kissimmee (South Orlando), Tampa, St. Petersburg, and Fort Myers have already announced that they will have marriage equality on January 6. Of Florida's largest cities, only Jacksonville has said they will not, and is waiting additional instructions. Other areas will be stating their position shortly.