Editorial from Eddi: What is Happening With Marriage Equality in the United States? And Why Is It So Confusing? Questions and Answers 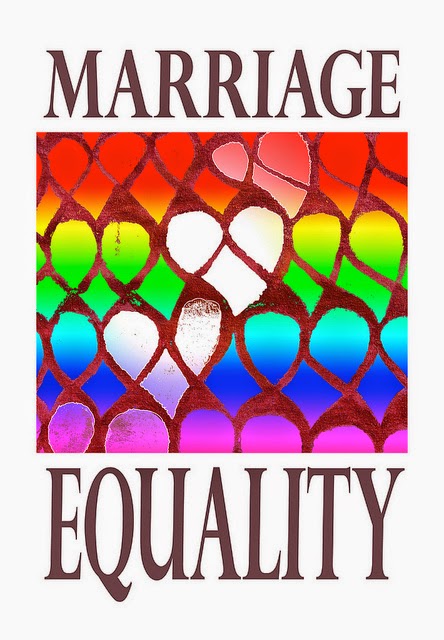 The Supreme Court of the United States (SCOTUS) has brought marriage equality to 10 states this week, and will bring more in the coming few weeks, They have done this by refusing to hear cases on the issue and by allowing lower court rulings to stand. They have made a decision by not making any immediate decisions.

As of  the time I write this article, 11:00 PM at night on Friday, October 10, marriage equality is law in 28 of the 50 States plus the Capital of the United States, The District of Columbia (Washington D.C.). In addition, the state of Missouri (6 million people) will recognize same-sex marriages if performed in any other state, including neighboring Illinois and Iowa.

The majority of citizens of the 50 United States live in states and territories where marriage equality is legal.   Over 186 million people, about 59% of the population live in marriage equality areas.
Another way to look at this is that as many U.S. Citizens live in marriage equality areas as there are in the European nations of France, The United Kingdom, and Spain combined -- or almost 6 times as many as there are in all of Canada.  The U.S.A. will soon pass Brazil, with a population of 202 million, as the single largest nation where more same-sex couples can get married once some legal paperwork is filed to add more states to the growing list.


Marriage equality states are shown in the above map in dark blue. However, in the past few hours, Idaho, a light blue state (in the upper right corner) has become dark blue and has marriage equality. The conservative Republican Governor of Idaho has decided to throw in the towel and not challenge a  court ruling in the matter.

Many other states will have marriage equality over the next several weeks once documents are filed in state and federal courts bringing decisions already made to the local books including the very conservative states of Alaska, Kansas, Wyoming and South Carolina.

You can keep track of developments here:
http://en.wikipedia.org/wiki/Same-sex_marriage_in_the_United_States

Q. Why is this taking so long?

A. The United States of America is a federation of 50 states which are governed by a constitution which limit federal powers. Marriage is something that each state managed according to its own laws - unless told to change by the Supreme Court of the United States (SCOTUS)

Q. Has the Supreme Court told states that they need to accept marriage equality?

A. No.  And not only that, they ducked the issue this week by refusing to rule on the matter.

Q. So why are all these states now having to accept marriage equality?

A. No, the 12 federal circuit appeals courts, the court system in place right below the U.S. Supreme Court.  The USA is divided in 12 districts. Each of the 50 states are in one of 11 districts. The 12th district is held for federal issues. You can see how these courts divide in the map below.

Q. So what did SCOTUS exactly rule on Tuesday?

A. SCOTUS refused to rule on decisions made in three of the circuits -- the 10th, 7th, and 4th -- that say that any state in these districts much have marriage equality. So in effect, by NOT ruling, they let district rulings stand and removed "stays" which were put in effect stopping any marriage pending their decision.

Q. What about the other districts?

A. Districts 1, 2, and 3 already have marriage equality. The states themselves approved it in these areas.

District 9 has also approved marriage equality; it is seen as a matter of time before all states in the District which do not have equality will have it, including Alaska, Arizona, and Montana. Court cases need to be pushed up the "pipeline" of decisions for this to happen.

Q. What happens if any of these other districts refused to recognize marriage equality?

A. Then, SCOTUS will be forced to take up the issue and rule on the matter for all 50 states.

Justice Ginsburg, the head of the liberal side of the Court, has already told District 6 that they can expect SCOTUS to rule on the matter if they say no.

The other districts are seen as very conservative, and have not yet made any rulings or indicated when they will.

Q. Is SCOTUS stalling then?

A. Exactly!  SCOTUS is waiting for as many states to already have marriage equality before  they have to compel the other conservative states to do so. They seem to be wanting a "slam dunk" decision that will generate as little controversy as possible. They want to compel as few states to enforce marriage equality as they have to. They would rather the lower courts make this a less of an issue for them -- which is exactly what is happening.

Q. When will all 50 states have marriage equality?

A. I expect this to happen by the end of June 2016. The lower districts will have approved it by then, or SCOTUS will issue a ruling to compel the "hold-out" conservative states to do so by agreeing to hear a case from a lower district.