Classic Cinema: The Most Famous Movie About Politics of all time, Mr. Smith Goes To Washington Premieres 75 Years Ago 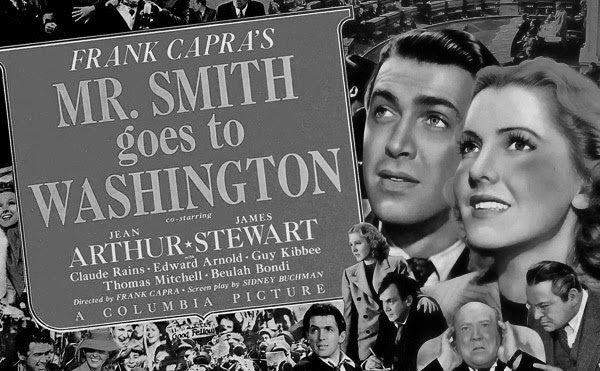 Mr.Smith Goes to Washington  premiered 75 years ago tonight.  It is arguably the most famous and controversial political movie of all time, and immediately banned in many countries -- and condemned by many in the U.S.A. as being too potentially subversive.

The film  is a Frank Capra 1939 American political comedy-drama film, starring Jean Arthur and Jimmy Stewart; the move made Stewart into a major movie star.  Mr. Smith Goes to Washington was attacked by the press and politicians for being anti-American and pro-Communist and for its exaggerated portrayal of corruption in the American government - even though popular democracy and honesty win out at the end.


This film was banned in many totalitarian states around the world, including Hitler's Germany, Mussolini's Italy, Franco's Spain and Stalin's USSR.  World War 2 was underway, and the movie was seen as far too supportive of human rights and democratic forms of government  for one party regimes to take comfort with.  These days, the movie is universally admired, and even loved, as a tribute to American democracy.

This is a feel good movie -- and one of my favorites. Make sure to see it.

To find out more:
Mr. Smith Goes to Washington

To find out other films made in 1939, the greatest year in the history of film:
http://eddihaskell.blogspot.com/2014/02/classic-cinema-my-list-of-9-greatest.html