Tomorrow is the 200th Birthday of the Star-Spangled Banner. Look for the Great Fireworks Show and Reenactment on PBS Tonight. 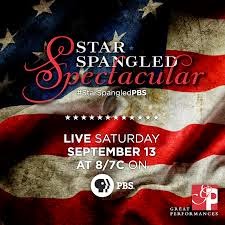 There will be a concert and fireworks show, and reenactment of that famous night, to celebrate the event broadcast live tonight from Baltimore Harbor (delayed for the West Coast) on PBS Television beginning at 8:00 PM EST. Check your local listings for details in the U.S.A.

What is the background of the Star-Spangled Banner?

The Battle of Baltimore

The U.S.A. and the Great Britain. went to war a second time (after the American Revolution) in June, 1812. In September, 1814, the British Navy sailed up the Chesapeake Bay and tried to capture the important city of Baltimore, Maryland. They needed to defeat the American forces occupying Fort McHenry (which can be visited today) outside the city -- and launched a huge cannon bombardment on the night of September 13. However, they failed to defeat the American forces and withdrew their ships.

Francis Scott Key, a Baltimore author and lawyer was aboard a British warship watching the battle that night (he was part of a prisoner exchange program). He heard the horrific battle and was not sure if Fort McHenry would hold out against the British bombardment.  He woke up the next morning, and saw the U.S. Flag -- the original Star-Spangled Banner - which can be visited today in Washington, D.C. -  still flying.  He was hugely inspired and would go on to write the poem, The Defense of Fort McHenry, the following week.  He intended the poem to be sung to a popular British tune, John Stafford Smith's "To Anacreon in Heaven", which resulted in the song "The Star Spangled Banner".  The song would go on to become the national anthem of the U.S.A..

To find out more:
http://amhistory.si.edu/starspangledbanner/


The first stanza of The Defense of Fort McHenry talks about the Star-Spangled Banner and is the one sung these days.

O say can you see by the dawn's early light,
What so proudly we hailed at the twilight's last gleaming,
Whose broad stripes and bright stars through the perilous fight,
O'er the ramparts we watched, were so gallantly streaming?
And the rockets' red glare, the bombs bursting in air,
Gave proof through the night that our flag was still there;
O say does that star-spangled banner yet wave,
O'er the land of the free and the home of the brave?

John Williams, arguably the greatest living American composer, wrote a new version of The Star-Spangled Banner which was performed on July 4 of this year in Washington D.C. which shows the reenactment of the famous battle. You can see it here: