Arts and Culture: Fiddle on the Roof Opens on Broadway 50 Years Ago Tonight 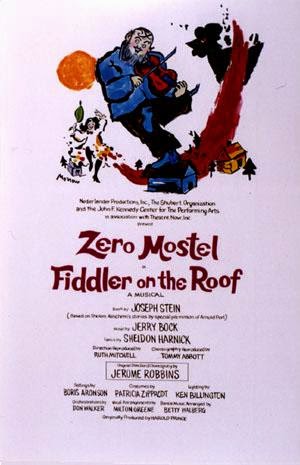 Fiddler on the Roof, the first Broadway production to have over 3,000 consecutive performances, and one of the best known musicals of modern times, opened 50 years ago tonight at the Imperial Theater. Fiddler held the record for the longest-running Broadway musical for almost 10 years until Grease surpassed its run. Fiddler has consistently been staged around the world in revival productions since.

Bette Midler played the important role of Tzeitel in Fiddler from 1966 - 69. She was 21 years old when she landed this role.  You can hear her sing the part in the Tony Awards from 1968 below.

Bea Arthur, Dorothy from the Golden Girls, played the role of Yenta the Matchmaker in the original performance.

To find our more about Fiddler on the Roof:
http://en.wikipedia.org/wiki/Fiddler_on_the_Roof

Email ThisBlogThis!Share to TwitterShare to FacebookShare to Pinterest
Labels: Fiddler on the Roof