1989 was a momentous year.  The Cold War between the East and West was coming to an end. Communist single-party regimes were falling all over Eastern Europe. In November, the Berlin Wall would fall, uniting millions of East and West Germans who were separated from each other for over 30 years.

However, this was not to be the case in China. One of the greatest mass protest movements, led by students, and calling for the end of the Communist single-party regime in China would end tragically in Beijing the Tiananmen Square Massacre.

Mass protests had started earlier in April and in 400 cities around China calling for freedom and individual rights. By the time June 4 came around, hundreds of thousands of protesters led by students massed in Tiananmen square in the center of Beijing and in other locations.

The Chinese army, undertaking orders made by the communist politburo, began to brutally put down the protest movements that night, and started clearing the square. Estimates of total protester casualties (counter-revolutionaries as they are called today by the Chinese government) range from 1,000 - 6,000.

China has made remarkable economic progress in the past 25 years. Some estimates place its Gross Domestic Product calculated by Purchase Parity Index ahead of the United States. However, personal freedoms are still restricted, and political dissidence a crime. But for a brief  moment, democracy in China was possible -- spearheaded by students who gave their lives in the hundreds as a result of the failed protest.

You can read about the massacre here: 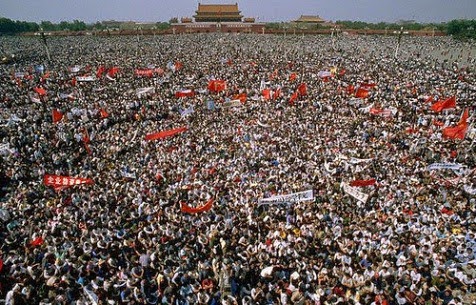