Second Life in the News: From the U.K.'s Guardian Newspaper: Second Life to be Reincarnated, with Oculus Rift. Newspaper speculates that Facebook may consider the purchase of Linden Lab /Second Life 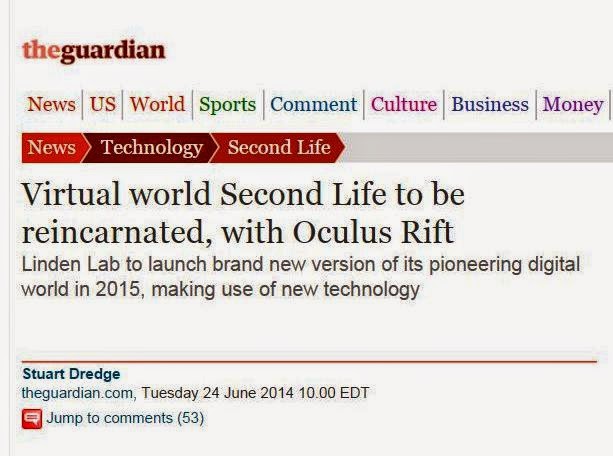 Note from Eddi:  The Guardian implies Facebook is looking at the acquisition of Linden Lab / Second Life.

Linden Lab to launch brand new version of its pioneering digital world in 2015, making use of new technology

Whatever happened to virtual world Second Life after the flurry of hype and influx of brands in 2005 and 2006? You don't hear much about it nowadays.

Actually, Second Life never went away; it was the media and brands that once flocked to it who melted away. The world's existing community of around 1m users carried on with their virtual lives much as they had before.

Second Life's parent company Linden Lab wasn't the future of marketing or the next billion-dollar technology acquisition as some suggested, but it did continue evolving into a stable, sustainable business.

Now, in 2014, it has a new chief executive and renewed ambitions to break out of its niche. Ambitions which include launching a completely new version of Second Life, as well as making it work with the now-Facebook-owned Oculus Rift virtual reality headset.

"With technology, market interest, hardware and software available, now is the time to give it another big shot. We have the experience to do it more than anyone else," CEO Ebbe Altberg told TheNextWeb, adding that the new version of Second Life will launch in beta form in 2015, then commercially in 2016.

"It’s a massive project to do a new virtual world. To start from the ground up we’re hiring 40-50 more people... We’re not going to constrain ourselves with backwards compatibility."

That in itself may be controversial, given the fact that many of Second Life's users have been immersed in the virtual world for a little over a decade now, including building (and often selling) their own virtual objects using its in-world economy. Migrating them across will be a major task.

TheNextWeb describes the Oculus Rift integration for Second Life as being in a "very early version", with the company still working on how people will control their virtual characters, if they can't see a mouse and keyboard.

For now, the company's business is focused on Second Life, as well as children's iPad app Blocksworld – which it acquired in January 2013 – digital games service Desura and creation game Patterns.

Minecraft looms large in those new products, and may well also serve as inspiration for the new Second Life. That's no surprise: Mojang's blocky crafting game has found the mainstream audience – nearly 50m sales so far – that has so far eluded Linden Lab.

Then again, Altberg may be looking more to the words of Facebook chief executive Mark Zuckerberg, who announced his company's $2bn acquisition of Oculus VR in March 2014 with a prediction that virtual reality will go far beyond gaming.

"Imagine enjoying a court side seat at a game, studying in a classroom of students and teachers all over the world or consulting with a doctor face-to-face -- just by putting on goggles in your home," wrote Zuckerberg.

"This is really a new communication platform. By feeling truly present, you can share unbounded spaces and experiences with the people in your life. Imagine sharing not just moments with your friends online, but entire experiences and adventures."

To do that, Oculus Rift will need developers to create those "unbounded spaces and experiences", with Linden Lab having more experience than most in the area.

Who knows, if the company does a good enough job with Second Life's second life, perhaps Zuckerberg will reach for his wallet again.

To see the article: