Classic Cinema: Passover Starts Tonight -- See One of the Greatest Special Effects Ever Filmed: The Parting of the Red Sea in the 1956 Movie The Ten Commandments 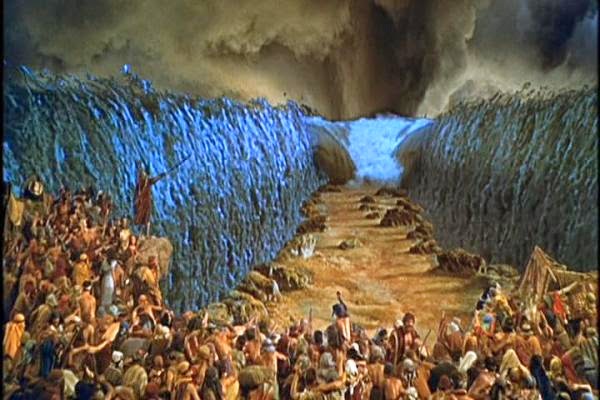 The Jewish holiday of Passover, celebrating the freedom of the Hebrew Slaves and deliverance from bondage in Egypt, begins at sundown night. Millions of Jews and others will be sitting down with friends and family at a Seder, a festive meal, that recalls the Exodus from Egypt over 3000 years ago.

The holiday celebrates events that are commemorated on film in several movies, the most famous being the 1956 campy and overdone religious spectacular "The Ten Commandments", which is one of my my favorite great movie epics.  They simply do not make them like these anymore.


The movie is legend in Hollywood - and the subject of a half century worth of jokes-- for its over-the-top script, staging, and costumes. Mel Brooks depiction of Moses delivering the 10 Commandments -- a comedy take off from this movie in History of the World Part 1 -from 1981- is very funny.

The handsome male cast, including Yul Brynner as Pharaoh, Charleton Heston as Moses and Jon Derek as Joshua shows their beefcake bodies in skimpy outfits throughout the flick. The Edith Head costumes are particularly over the top, as is the lush music background written by legendary film composer Elmer Bernstein. Charleton Heston showed his his impressive physique in the first half of the flick (before his encounter with the burning bush on Mount Sinai -check out the photo below -- he really knows how to handle a whip.


Handsome Yul Brynner took up weight lifting for several months to build his physique up since he felt that Charleton Heston's impressive height and build made him look puny. I do not think anyone has ever looked at fetching with an Egyptian headdress.


The overdone female roles, most notably Anne Baxter as Queen Nefreteri, are treasures of exaggerated femme fatale acting, and famously inspired drag queen Wesley Snipes in the 1995 film To Wong Foo, Thanks for Everything! Julie Newmar  Take a look at the clip below -- no one can pull off her acting today.


What I like most about the films are the special effects, which are still some of the best ever made. These are not digital and were filmed in live technicolor. The parting of the Red Sea, which was stages in a huge water tank in Hollywood and filmed live (in reverse) remains one of the best ever done. I show it below just in case you have never seen it.


One interesting fact about this scene. Notice the three "maidens" standing together in the wind in the clip at 21 seconds. Cecil B. Demile, the director, was a notorious perfectionist (many other words were used to describe him). He ordered  over 100 takes of this short scene to be made and was not satisfied with any of the results. The three actresses got so sick of having huge fans blowing winds in their faces that they refused to continue.  He was forced to either replace them or accept one of the existing outtakes, which he did.


I want to wish all who are celebrating tonight rs a very happy Passover for you, your family, and friends.