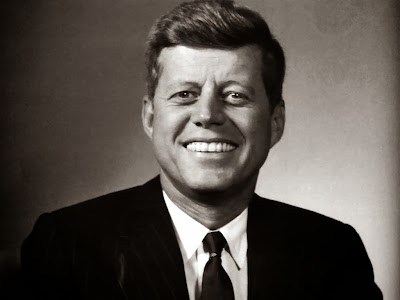 Although JFK was President of the United States for under three years, he is remembered for his progressive vision, his youth and vigor (he was elected at 43 years of age), and, together with his wife Jacqueline Kennedy, his style and elan.  He was also  tough, and starred the U.S.S.R. down in 1962 during the Cuban Missile Crisis. Although the incident was really a draw (the United States agreed to withdraw similar missiles from Turkey in a secret agreement), it appeared to the world that the Russians had "blinked first" in averting nuclear Armageddon. His speech announcing the start of the blockade against Russian ships into Cuba, an act of war, shows his coolness under pressure:


To hear the horror that people felt when they found out about the assassination, the live recording from the Boston Symphony Orchestra, from JFK's home state of Massachusetts, where he was loved the most, listen to this live recording of conduction Eric Leinsdorf informing the audience of the assassination right after it happened, and immediately playing Beethoven's Funeral March in a powerful performance.

One of the things that President Kennedy is best remembered for is the founding of the Peace Corp, a great international program which has seen over 200,000 Americans serve in over 139 countries in the past 50 years. He announced the Peace Corp initiative at my alma mater, The University of Michigan on October 14, 1960, right before he was elected President, during a 2:00 A.M. Campaign Stop. His remarks were informal, but immediately drew a positive response. You can hear his speech in the video below.

Vice President  Lyndon B., Johnson, a Texas Democrat, assumed the Presidency when Kennedy died. He actually did a tremendous amount for social justice in the United States. He pushed through civil rights legislation (ending Jim Crow racial segregation in the South in 1964),  and expanding social programs to end poverty. However, his record in getting the United States involved in the Vietnam War, cost him a second reelection in 1968, and destroyed his reputation.


President Kennedy's wife, the elegant and well spoken Jacqueline Bouvier (Jackie) Kennedy was an
important  part of the Kennedy mystique. Jackie brought style and sophistication to the image of the United States that even sophisticated Paris admired. She would go on to be a major influence in her own right after his death, and is most notably remembered for saving New York's great Grand Central Terminal, 100 years old this year, from the wreckers ball in the late 1960's by calling up company CEO's and asking them to do what she wanted. No one refused her. She was also responsible for restoring the White House to the glamorous residence and showcase of American decorative arts it is today.  In 1962, she gave a tour of the renovated White House on national television, you can hear her aristocratic New England tones in the video below.

The Kennedy years became associated with a huge Broadway Musical, Camelot, which was a hit on Broadway at the start of his administration. The slide show below, called Camelot,  shows just why America still mourns the tragic death of this handsome President, and the youth and energy that his family brought to the office. Tragically, his talented brother, Robert F. Kennedy would be shot down in 1968 during his run for the Presidency. In addition his son and heir, charismatic JFK Jr. would lose his life in a plane crash in 1999.

But for a brief shining moment, as the words in a song from the musical Camelot proclaim:

"Don't let it be forgot, that once there was a spot, for one brief shining moment that was known as Camelot"