The great Italian composer Giuseppe Verdi was born 200 years ago today in a village near Buseto in what is now Northern Italy. Verdi, together with Richard Wagner who celebrated his 200th birthday this past March, is widely considered to be one of the two greatest composers of grand Opera in the19th century. His numerous works are frequently performed in opera houses throughout the world. Many of his works have transcended the boundaries of Opera and are known widely in popular culture including songs that I show in videos below. 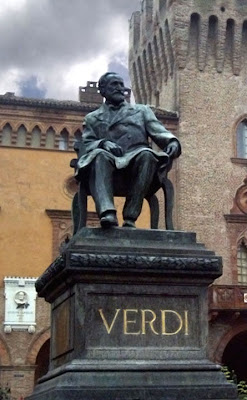 To find out more about Verdi:
http://en.wikipedia.org/wiki/Giuseppe_Verdi

For a complete list of his 37 Operas and other works:
http://en.wikipedia.org/wiki/List_of_compositions_by_Giuseppe_Verdi

Shown below are some of his most widely known works from four or his most famous operas.


The Drinking Song from La Traviata (The Brindisi)


Chorus of the Hebrew Slaves (Va,Pensiero) from Nabucco