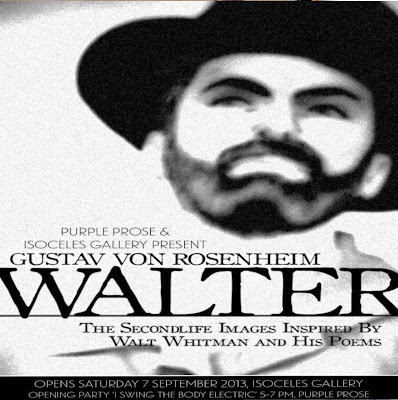 I took the information below from a note card being distributed at the exhibit which is now open.

There will be an opening party from 5:00 PM - 7:00 PM tonight at Purple Prose with Body Electric

One of my friends, Abinoam Nørgaard, organized a “Walt Whitman Photo Contest” in SL. That was the beginning.Though I read Whitman's poem when I was young, reading his poems again in the light of his sexuality was a whole new revelation. So many of his lines that had previously seemed obscure suddenly rang clear and true.

Ridiculously enough, in the Reallife world there are literary scholars who are in denial about Whitman's sexuality, or who treat it as “taboo” in order to avoid it any discussion of it, because, again, ridiculously they think his great career as a father of modern poetry shouldn't be tainted in that way. In SL, you can do anything. So I decided to bring him back to life in SL. In these photos, I have tried to breathe life into his marvelous poetry, to feel his life, his thoughts and his love.

I greatly enjoy taking photos and exploring Second Life. I'm a lover of art, history and literature. Most of the time, I can be found in the Berlin 1920s Project SIM.
“FIELD” won the 1st prize in “Secondlife Walt Whitman Photo Contest” in March, 2013.

You can find more of my work at:
http://www.flickr.com/photos/gustavsl/
https://www.facebook.com/vonrosenheim.gustav

Periodically featuring the works of some of Second Life’s premier artists, the Isoceles Gallery is located in the urban flats region of The Parish Sims, a grouping of regions that are gay owned, LGBTQ and straight friendly, and tailored to serve residential and light commercial needs.


Freshly launched in July 2013, Purple Prose is a not-for-profit library-themed bar intended to introduce diversity and freshness into the SL gay scene. Events include electroswing dance parties and literary discussions. Its prime objective is to get gay guys in SL to become more aware of their literary heritage, as well as to cultivate and develop emerging literary talent in SL, by providing a space for the sharing of personal work.