I live in the State of Florida in the United States. I have found the state and county governments easy to deal with. Every time I have had to do things like call a state office or law authority, they have been polite and competent, if not a little bit slow. All-in-all this is an easy place to live.

However, what just happened to me today takes the prize for good state government. On June 30, I had to drive south of where I live -- about a 90 minute drive - to attend a play in Coral Gables which is a part of Miami. The traffic coming home was very busy, which I found surprising since it was Sunday night.

I had to enter the toll barrier above - The Golden Glades intersection. It was raining, jammed, and crowded. I do not have a "Sun Pass" sticker for my car which lets you go through these toll barriers automatically without having to pay a toll. Instead, I needed to go through a cash lane. By the time I saw the sign that told me to move to the far left booth, since it was the only one that allowed non-sticker people to pay for tolls, it was too late to move over. And then I did something I never did before - not pay a toll at a toll booth.

Ever since then, I have been expecting a $100.00 traffic violation (which is the stated amount) for doing this. However, the violation notice came in the mail today. There is no violation charge!

All the Florida Department of Transportation wants is a check for the toll amount -  $1.25, and some money for administration costs, $2.50. I think this is great,  a state government that does not rip it's citizen's off when they have them by their (you fill the word). I guess the system is on your side sometimes. 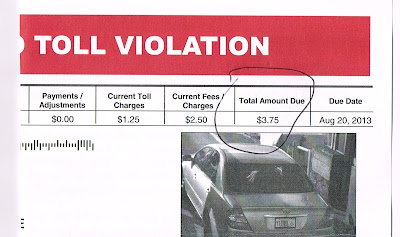