50 Years Ago Today: Dr. Martin Luther King Delivers His Great "I Have a Dream Speech" in front of 250,000 People in Washington D.C. 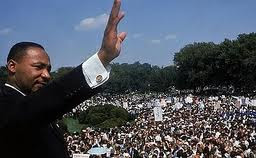 Dr. Martin Luther King is the greatest civil rights leader in the history of the United States, and one of the greatest Americans of all time.  He led the civil rights movement of the 1960's for racial equality and was assassinated as a result  in 1968.  He is widely considered to be one of the greatest orators in the 20th Century in the United States, matched only by President Franklin D. Roosevelt who led the nation though  the great depression and the Second World War.  The power of his rhetoric galvanized a nation into acting on his vision of social justice.

Dr. King's most famous speech is the speech from the March on Washington in 1963--  the famous "I had a dream speech" which was delivered 50 years ago today. Over 250,000 people jammed the nation capital in what is regarded as the penultimate moment or the civil rights movement. The speech was ranked the top American speech of the 20th century by a 1999 poll of scholars.

You can hear the most famous part of the speech at the end of this article.


Before the civil rights movement took hold in the United States in the 1960's, African Americans, were extremely discriminated against in the United States. In fact, in the Southern States, they went to segregated schools, could not use the same facilities or restaurants as white people, and had to sit in the back of the bus or any other transit facilities.  Dejure legally sanctioned segregation in the South (Jim Crow laws) fell forever following this great event when  President Lyndon Johnson signed the Civil Rights Act of 1964 into effect.

And when this happens, when we allow freedom to ring, when we let it ring from every village and hamlet, from every state and every city, we will be able to speed up that day when all of God's children, black men and white men, Jews and Gentiles, Protestants and Catholics, will be able to join hands and sing in the words of the old Negro spiritual, "Free at last! Free at last! Thank God almighty, we're free at last!" 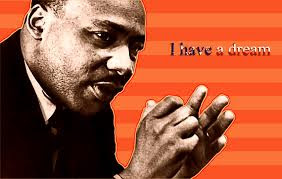 The United States has made great progress in the past 50 years, and now has an African-American President, something unimaginable in Dr. King's time. Dr. King's birthday is now celebrated as a United States National Holiday on  the third Monday in January. However, there is still much work that needs to be done, including marriage equality in all 50 states.

Let us all reflect on how we treat others, inworld and out, in honor of this great day.

President Obama will be delivering a major speech on the same location as Dr. King did 50 years ago, in front of the Lincoln Memorial, in Washington D.C. this afternoon.

To Find Out More about the speech:
http://en.wikipedia.org/wiki/I_Have_a_Dream

To read the full text of the speech:
http://www.analytictech.com/mb021/mlk.htm

To Find Out More about Dr. Martin Luther King:
http://en.wikipedia.org/wiki/Martin_Luther_King,_Jr.