Did Pope Francis Just End The War on LGBT People Inside the Catholic Church? 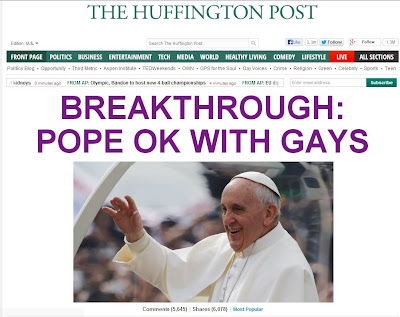 According to the Huffington Post, where it is front page news, and other American news networks this morning, Pope Francis has indicated he is OK with gay people.

He said this informally to reporters on an airplane back to Rome from Brazil this morning.

He went beyond this to say:

"Who am I to judge a gay person of goodwill who seeks the Lord?" the pontiff said, speaking in Italian. "You can't marginalize these people.

His predecessor, Pope Benedict XVI, signed a document in 2005 that said men with deep-rooted homosexual tendencies should not be priests. Francis was much more conciliatory, saying gay clergymen should be forgiven and their sins forgotten.  In effect, he has just said it is ok for celibate gay men to serve as priests.

About a reported "crackdown" on a "gay lobby" inside the Vatican, was dismissive, he joked that if there really is a “gay lobby” he hasn't yet seen it stamped on anyone’s ID cards.

In addition, Pope Francis has dismissed a persistent rumor that his predecessor, Pope Benedict, was forced to resting due to a "gay scandal" at the Vatican. P Italian media reports suggested that a group within the church tried to blackmail fellow church officials with evidence of their homosexual activities. Italian media reported this year that the allegations contributed to Benedict's decision to resign. Francis said he investigated and found nothing to back up the allegations.

Do not expect the Catholic Church to approve LGBT marriage. It will not, at least not in the current time. It will not approve woman priests either (the pope confirmed this). But these are changes that can serve a long way towards the acceptance of LGBT people in society.

Has Pope Francis just ended Pope Benedict's war on gay priests and other clergy?  Will this be the beginning of a new, more tolerant Catholic church?  Conservatives are going to try to marginalize his statement. However, Pope's lead from example -- and what Pope Benedict, who is turning out to be a far more socially liberal and even radical Pontiff than anyone expected, has just did an enormous service to LGBT people around the world today.