Great Second Life Destiantions: The US Holocaust Memorial Museum, The Most Moving Museum in Second Life


The U.S. Holocaust Museum is the most moving museum in Second Life. The Main part of the museum has realistic builds and interesting graphic displays,  What makes this museum so moving is their current multimedia show on Kristallnacht, the night of the broken glass all across Nazi Germany which is considered by many historians to be the starting point of the holocaust which slaughtered 6 million Jews across Europe, or one third of the world;s Jewish population at the time.

Over 1,000 Synagogues were destroyed and over 7,000 Jewish Owned Businesses with looted or destroyed across Germany and Austria on that terrible day. That night was a forerunner of what was later to come --- mass extermination of an entire population.


The exhibit, “Witnessing History:  the 1938 Pogroms,” created by the US Holocaust Memorial Museum, offers a virtual experience of the "Night of Broken Glass" and its vicious attacks on German Jews.The multimedia exhibit is very well done and combines sounds, recordings of actually witnesses of the vent, interactive graphics, in a realistic and dark build of a German urban center in 1938

Make sure your sound and media are on to experience the multimedia aspects of this exhibit.

I am giving you two landmarks.  It is had to find the entrance to the main multimedia exhibit and the last Slurl with put you right inside. 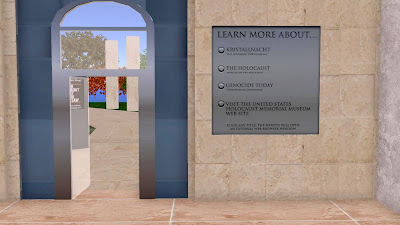 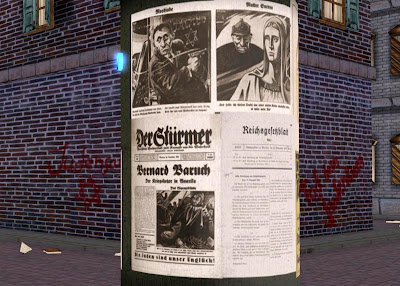