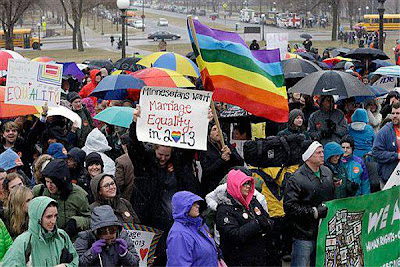 Will Minnesota become the third U.S. state to approve same-sex marriage in one week?

In the past week, Rhode Island and Delaware became the 10th and 11th U.S. States to legalize gay marriage.  Minnesota is set to vote today. If the bill passes the Democratic controlled Minnesota House today, the Democratic-led Senate could vote on it as soon as Saturday. Governor Mark Dayton has promised to sign the bill into law immediately.

Despite being the home of nutcase and anti-gay right-wing evil witch Republican congresswoman Michele Bachmann, Minnesota is a safe Democratic state, and very progressive in outlook. It has not voted for a Republican Presidential candidate since 1972. If it approves gay marriage, it will join neighboring Iowa as the second state in the American Midwest heartland to approve same-sex marriage.

The battle for marriage equality moves to the large State of Illinois next, the home of President Obama and the City of Chicago.  Although Illinois is also a bastion of the Democratic party, opposition from the powerful   religious groups in the City of Chicago is making passage difficult. However, the leader of the movement in the Illinois State Legislature feels that the votes will be there by the end of May when the legislature ends its deliberations before a Summer recess.

The U.S. Supreme Court is expected to rule on this issue by the end of June.