What Does the Bible Say About Same-Sex Relationships? It Contains Some of the Most Intense Homoerotic Love Poetry Ever Written!

What exactly does the bible say about same-sex relationships?

Certain passages in the bible, or the Old Testament (The Torah for Jews) and the New Testament.  have been used to condemn gay love and gay people. However, a deeper look at the Torah, when translating it in its original Hebrew,  shows that this "condemnation" is not based on what has been said, but how it has been interpreted.

What exactly does the Torah say about gay love in its original Hebrew language?  The answer  is far more ambiguous than many think. We need to go back to the original sources, and go beyond  the New Testament translations, which make assumptions about the meaning of certain terms which do not reflect the original context.  Whenever a source document is translated into another language, meanings of words alter a bit to reflect current opinions and inclinations.

The Old and New Testaments were written in ancient Greek, and then translated AGAIN into Latin, and then into other languages such as English (the King James Version of the Bible).  Words change and lose their correct meaning when such translations occur, and entire translations lose meaning as a result.

Does the Torah condemn all same-sex relationships?

No it does not. Many Rabbis and other biblical scholars now think that the "prohibition" against same-sex relationship actually was a prohibition against the practice of temple prostitution which was prevalent in the pagan cultures that surrounded the monotheistic Hebrews. The story of Sodom and Gomorrah, used by certain religious conservatives, now is though of as a condemnation against child pederasty, not against same-sex loving loving committed relationships. 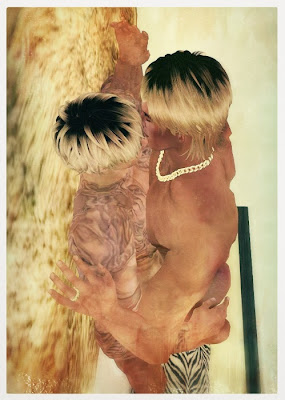 "The song of songs, which is Solomon's"

I hear my love, see how he comes
leaping on the mountains,
bounding over the hills.
My love is like a gazelle,
like a young stag.

Let him kiss me with the kisses of his mouth,
for your love-making is sweeter than wine.
In his delightful shade I sit,
and his fruit is sweet to my taste.
My love is mine and I am his.


My beloved is all radiant and ruddy, distinguished among ten thousand.
His head is the finest gold; his locks are wavy, black as a raven.
His eyes are like doves beside springs of water, bathed in milk, fitly set.
His cheeks are like beds of spices, yielding fragrance.
His lips are lilies, distilling liquid myrrh.

His arms are rounded gold, set with jewels.
His body is ivory work, encrusted with sapphires.
His legs are alabaster columns, set upon bases of gold.
His appearance is like Lebanon, choice as the cedars.
His speech is most sweet, and he is altogether desirable.
This is my beloved and this is my friend, O daughters of Jerusalem.