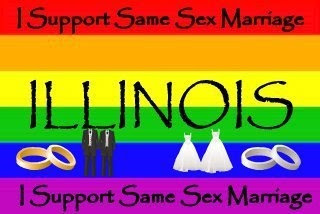 LaShawn Ford, a key undecided Illinois assemblyman, has said in an interview this week that he plans to vote yes on marriage equality legislation.

The vote for marriage equality must come by Friday of this week if it is to pass this year, before the adjournment of the State Legislature. The Illinois Senate has already passed the legislation, and the governor of Illinois has said he will sign the law into effect immediately.

Illinois is the fifth biggest state in the U.S.A with 13 million people. A yes vote will mean that Illinois will become the 13th state to approve marriage equality, and the fourth one in May 2013, with Rhode Island, Delaware, and Minnesota.

As of Wednesday morning, a vote has not been scheduled. The count is very close-- but a vote will only occur if the marriage equality side is certain of victory.


More good news -- right wing Republican congresswoman Michele Bachmann, from Minnesota, who is one of the most anti-gay rights member of congress, has announced she will be retiring from Congress in 2014. She faces an investigation over misuse of her campaign finances. Her departure is good news indeed!