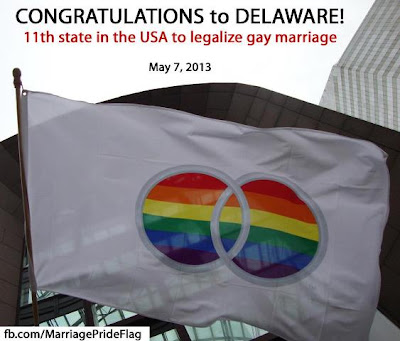 Delaware, the second smallest of the United States (after Rhode Island), and best known among gay people for the resort of  Rehoboth Beach, becomes the 11th State to legalize same-sex marriage on Tuesday.

There are 50 United States- 11 down, 39 to go. The District of Columbia, or Washington D.C. has also approved marriage equality.

The next state to approve same-sex marriage might be Minnesota, which could begin a process of approval as early as tomorrow, when the Minnesota House of Representatives may approve the measure.  Passage in the Minnesota Senate and signing by the governor will happen if the House approves the issue.