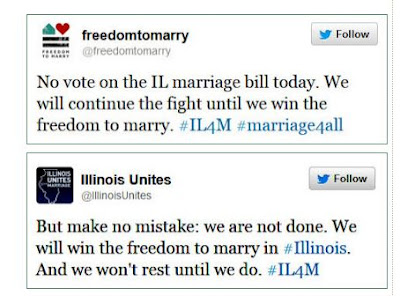 Bad new from the State of Illinois for Marriage Equality -- a vote did not happen in the House of Representatives tonight, meaning votes for passage were not there.

This is the first big defeat for marriage equality in the United States this year. But you can't win them all, and the tide is turning in our favor.

A decision from the U.S. Supreme Court will be announced in the next four weeks, so stay tuned for the next step in the struggle for equal rights.
Posted by Eddi Haskell at 8:58 PM