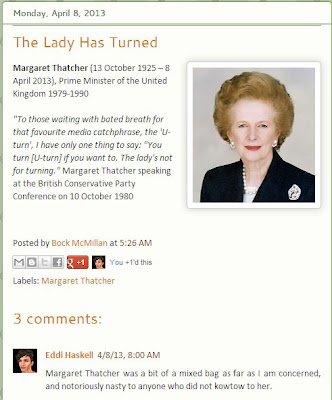 I just left a long comment over at Bock's blog on Margaret Thatcher who passed today.  I will share them with you here.

Margaret Thatcher was a bit of a mixed bag as far as I am concerned, and notoriously nasty to anyone who did not kowtow to her.

She turned the U.K. around economically but was extremely anti-LGBT people and pushed through the infamous Section 28, repealed 10 years ago, which banned the mention of anything positive said about equality in public schools. She was also pro the South African Apartheid Regime, a position which brought her into conflict with Buckingham Palace since The Queen refused to have her Commonwealth dismantled, and is famously non racist herself.

She did have much to do with opening the iron curtain and bringing freedom to Eastern Europe, together with her buddy Ronald Reagan, Pope John Paul 2, and most importantly, Mr. Gorbachev himself. She was the one who convinced Reagan (who adored her) to trust Gorbachev in negations-- she said that "she could do business with him".

She did take on the Argentinians in the Falkland Islands, and brought back British Pride to levels not seen since in World War 2.

Her state funeral, the first to be held for a commoner in 50 years (Winston Churchill was the last one) will be interesting to watch. But as a British citizen, I am not shedding any tears this morning.

On another interesting note, I used to work for a publishing company in London owned by Michael Heseltine, the former Conservative Defense Minister, who was the main person responsible for dumping her as Prime Minister. She apparently talked down to him in a cabinet meeting one day and he stormed out and told her that she was out. He then lined up his forces against her.


Addendum:  I will add that in the 1960's Thatcher was one of the few members of the Conservative Party to vote for the decriminalization of homosexuality.  So she does have one good spot in her record concerning LGBT people.