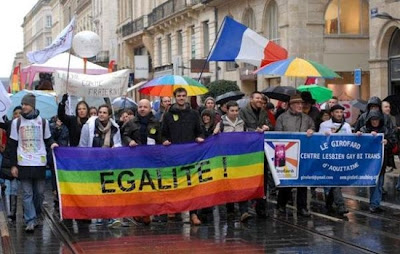 From Joe My God

The passage of this would mean that France would not adopt marriage equality anytime soon.  It would have to pass a national referendum.  It is good that this vote failed.

However, this must pass the Senate of France to take effect. The Right, and the powerful Catholic Church, are doing whatever they can to kill this law from taking effect. A huge demonstration last week of over 400,000 opposed to marriage equality frightened elected officials in power. The Socialist Party, which overwhelmingly supports this bill, is going to have to make a concerted effort to get this to pass the Senate. Defeat of marriage equality in France would be a huge boost to efforts to defeat the same in the U.K. and the United States.

Let us all hope this passes in France, it will be a huge victory if this occurs. The final vote will be very close. If the Senate of France passes this, it will become the law of the land with a Presidential signature.