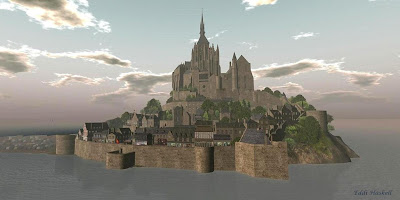 Mont-Saint Michele is a rocky island located about 1 kilometer off the Normandy Coast on France’s Atlantic seaboard. It is one of the most famous tourist destinations in France because of the magnificent Romanesque Church on top of ramparts, battlements, and castle structures which were part of the original Abbey which stood on this spot. It is also famous for its causeway which disappeared at high tides, but which is now being removed to restore Mont Saint Michel to its original island state. Second Life Mont-Saint-Michel does a good job in showing its stunning effect as a great construction of medieval architecture isolated as rugged outpost in the sea.


As a strange coincidence, Benja has also photographed here and ran photos in his blog at the same time.  You can fine them here: 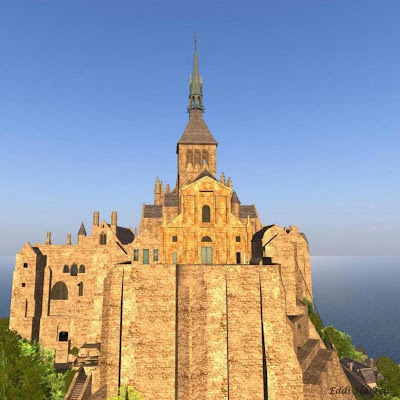 I have a new gallery featuring large-scale landscape photography. Through April 30, I will be featuring the photography of France in his gallery.  You can visit my new gallery here:
http://maps.secondlife.com/secondlife/Virtual%20Gay%20World/75/194/30

I also have a related feature on the photography of virtual France sims in the April issue of GMP magazine which you can find here on page 72:
http://eddihaskell.blogspot.com/2013/04/the-april-issue-of-gmp-is-our-with-my.html


As a strange coincidence, Benja has also photographed here and ran photos in his blog at the same time.  You can fine them here:
http://www.benjaaquila.com/2013/04/the-awesome-mont-saint-michel-in-second.html