Major Advance in UK Gay Rights: Same-Sex Marriage Passes It's First Reading in Parliament by a vote of 400 - 175


This is a great week for gay rights around the world.

The U.K joins France this week in approving the first legislative step for legalization of same-sex marriage.

The vote was 400 - 175. Several more readings of the legislation, and approval in the House of Lords (which is not a certainty) are required before the legislation becomes law. Passage is expected in late 2014 or 2015.

There was substantial opposition to this passage. The Church of England, the established church in the United Kingdom. of which Queen Elizabeth is Supreme Governor (a figurehead role), is opposed to passage. This will place it in the uncomfortable position of opposing the law of the land when the law passes.

David Cameron, the Prime Minister, and head of the Conservative Party, made approval of same-sex marriage legislation a key goal of his administration, and promised passage before the next election in 2015. He is a strong supporter of LGBT rights. Prime Minister Cameron was supported in passage by the two other major parties in Parliament, Labor and the Liberal Democrats.    However, he faced an open revolt in his own party, as more Conservative MP's voted against than for passage of the law, and has put hie leadership of the party in question as he may face an open revolt of party members because of this.  He needs to be commended for his integrity.

I am very pleased that my MP, hottie Zac Goldsmith was one of the Conservative Party votes for the passage of the bill. Zac actually replied to my email and told me we would be voting for passage. However, since Richmond Park is one of the most progressive constituencies in Parliament, this is not exactly a surprise.


some photos of London Hotties  from Gay Pride are shown below. 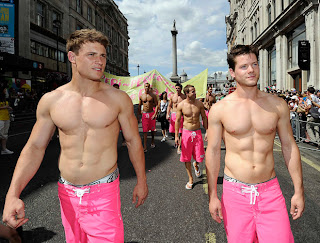 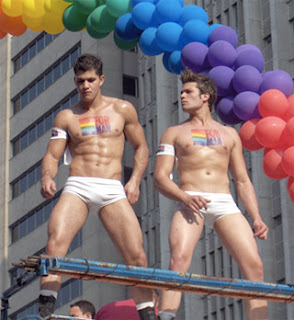