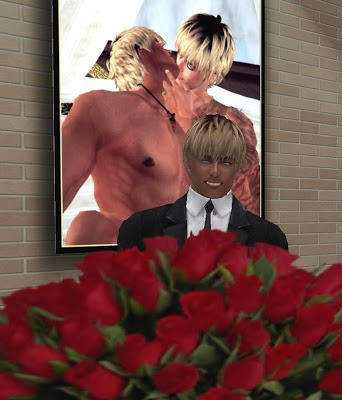 Benja surprised Ryce this morning (a jaw-dropping surprise) on their three month wedding anniversary by decorating their cabin onboard their yacht with roses, and asking Ryce to go immediately to this web link to see the poem that Benja penned:


Ryce Skytower,
you deserve the very best,
someone who will back you up without limits,
let you grow without borders,
and love you without end.
Will you let me be the one?
Will you marry with me?

Ryce is considering his response, which should appear on the blog post above later on today.  His jaw is still open since Benja just confirmed to him that he is the most romantic and handsome and wonderful person ever to cross his way. Ryce needs to come down from seventh heaven in the meantime.
Posted by Eddi Haskell at 1:25 PM