Meet Nate Silver, The Gay New York Times Blogger Who Very Well May Have Saved The Election For President Obama 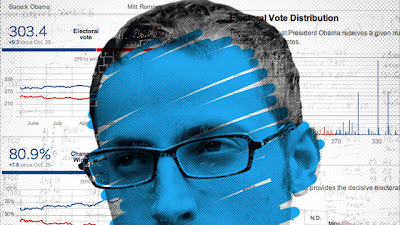 Meet 34 year old Nate Silver, the statistician genius and New York Times Blogger who may have saved the election for President Obama.  If President Obama wins reelection tonight, Nate may very well be one of the main people credited for his victory.

What exactly did Nate do?

In politics, momentum is everything. The conventional wisdom (what the media and pundits say in unison) was that President Obama had already lost the election since the momentum was in Romney's court. Nate Silver, by applying his rigorous statistical methodologies to the results, began to challenge the conventional wisdom.

Nate Silver is a statistician who looks at poll results, assigns weights to them, and compares them to historical results. Nate correctly predicted the Obama landslide in 2008 in electoral votes, and predicted the correct outcome in 49 of the 50 states (he did not get Indiana, which went Democratic for the first time since 1964).

What Nate did is show that there was no Romney momentum, that state polls continued to point to a clear Obama victory, and correctly predicted that national polls would converge with state polls (which happened this weekend) and agree on an Obama victory. Nate destroyed the narrative, most heard on Fox news, that Romney was the clear front-runner in October. This was hype, and Nate exposed it.

Democrats and independents are heading to the polls today in record numbers to re-elect President Obama. Nate this morning showed his estimated that President Obama has a 92% chance of reelection. He also showed that Hurricane Sandy had little to do with President Obama's increase in the polls -- that this momentum was building before the storm.

The right-wing hates Nate so much that they have been attacking him as "an effeminate gay man" on Twitter and in the press. Nate is not bothered by this.

If President Obama wins tonight, as Nate and the conventional wisdom now expects, America will have him to thank as the genius who destroyed Romney's momentum.