It's official.  I am now in a relationship  Meet my new boyfriend, Benja Aquila, who is from Spain and is one of the nicest, talented, and may I say handsome guys I have ever known. Most of all, Benja makes me incredibly happy and makes me look forward to logging into Second Life again. I have fallen in love with Benja over the past three weeks since Jago Constantine and I ended our partnership of four years.

Jago remains my very close friend, and someone who I hope will continue to spend time in Second Life on a regular basis. I have seen Jago since our break up by the way and have to say that real life is treating him well.  I am happy for my former partner.

Benja is both Eddi and Ryce's boyfriend, but will be seen mostly with Ryce Skytower. Eddi, over the past year, has increasingly become the business side of me. Eddi is the primary blogger, and my photographer identity on Second Life. Eddi also performs Second Life weddings as Reverend Eddi. It is as Ryce that I like to party at clubs, see friends, and be romantic -- and it is as Ryce that I will mostly be found in Second Life relaxing from now on -- and with Benja. So if you want to contact me inworld, best thing to do is to contact me and leave messages for Ryce Skytower.

I first met Benja several weeks ago as Ryce at Romanum at a party when my Second Life dad, DJ InsyX was spinning. We saw each over as friends at the end of my relationship with Jago. Being single allowed me to open my heart to Benja, and things just happened. I did not expect to become a couple so quickly with someone, but things happened, and I am happy they did. 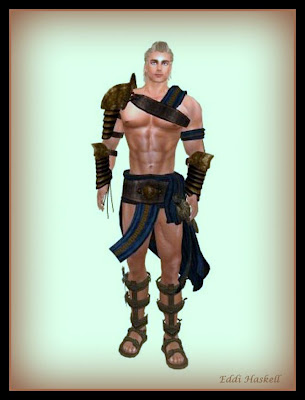 Benja owns a Roman and Greek store for artifacts and weapons he builds, Aquila Swords. I hope to get into role play with Benja since I love the outfits (that is Benja above in his hot warrior outfit) and plan to explore another scene in Second Life. Until then, I am spending great quality time with Benja, and are one happy guy.  Being in love again is doing wonders for both Ryce and myself!