Great News for Gay Rights in the United States: Sam-Sex Marriage Passes In At Least Two U.S. States by Popular Referendum For the First Time 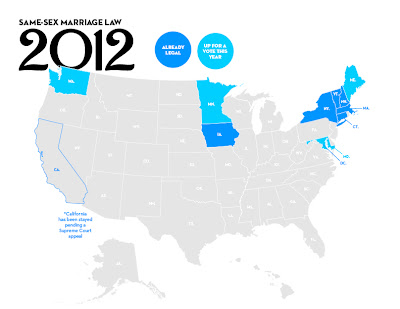 In addition to President Obama being reelected, at least two United State States, Maryland and Maine, have passed legalization of same-sex marriage by popular referendum. This has never happened by vote before in the United States on a state-wide basis.

Results from the State of Washington are not yet available, but should show the same result when counted.

Minnesota seems ready to defeat a constitutional ban on same-sex marriage. The results are not in.

This means that same-sex marriage is now legal in the states of:

Washington (State):  results should be known by the end of the day today.