The Northeast United States will be hit by a storm, starting tonight, which will be one of the greatest to strike anywhere at any time.

Above is a recent image of Hurricane Sandy, which has been labeled the "Frankenstorm" to its huge size, massive strength, and unprecedented path. Hurricane Sandy is now turning into a hybrid storm, a meteorological freak,  since it is absorbing at least two other weather systems, and is moving west and getting ready to strike the New York metropolitan area.  Only three Hurricanes in the past 100 years have moved west at this latitude, and only one other storm, the massive 1938 "Long Island Express" hurricane has come close to this monster. 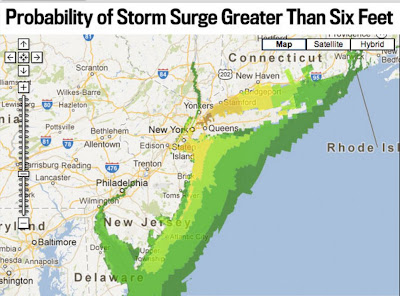 Evacuation orders have been given to millions of people in the Northeast. You need to be scared of something called a "storm surge" which is similar to a tidal wave but faster.  Water levels will rise six feet in some places quickly, and you might not be able to get out.

Is a certain handsome DJ listening who lives in an orange area right near the water listening?  You cannot simply ride out this storm if you have been told to leave.

The video below shows what a storm surge can do.   So please get the hell out of the way of this storm if you are in it's path. Your life may be at risk.