The Beverly Hillbillies, One of the Highest Rated Television shows of All Time, Premiered 50 Years Ago Today 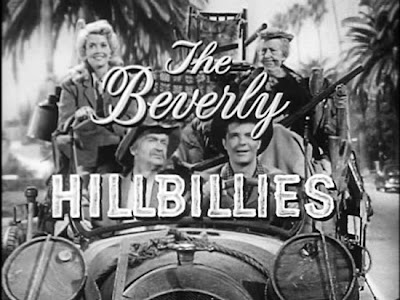 The Beverly Hillbillies, an American situation comedy, premiered 50 years ago tonight on CBS television.  The series ran from 1962 to 1971 and starred Buddy Ebsen, Irene Ryan, Donna Douglas, and Max Baer, Jr.. The serie s is about a poor backwoods family transplanted to Beverly Hills, California, after striking oil on their land.

The Beverly Hillbillies was panned by critics but quickly became a huge ratings success. It  ranked among the top twenty most watched programs on television for eight of its nine seasons, twice ranking as the number one series of the year, with a number of episodes that remain among the most watched television
shows of all time.

A great web site  on the Beverly Hillbillies can be found at: http://entertainment.ca.msn.com/celebs/photos/todays-real-hollywood-hillbillies


The first video plays the famous Beverly Hillbillies theme song, The Ballad of Jed Clampett. Here are the lyrics if you wish to sing-along:


Come and listen to a story 'bout a man named Jed
Poor mountaineer barely kept his family fed
Then one day he was shooting for some food,
And up through the ground come a bubbling crude
(Oil that is, black gold, Texas tea)

Well the first thing you know old Jed's a millionaire
Kin folk said Jed move away from there
Said California is the place you oughta be
So they loaded up the truck and they moved to Beverly
(Hills that is, swimming pools, movie stars)

The second video shows the very first show that premiered 50 years ago this evening.