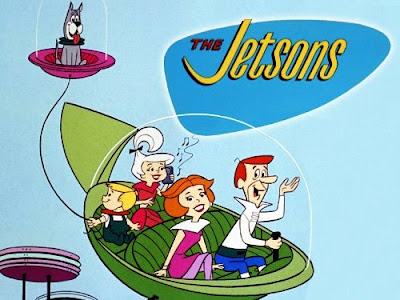 The Jetsons animated sitcom series premiered 50 years ago tonight on ABC television in the United States.
It was the Space Age counterpart to The Flintstones, another half-hour family sitcom projecting contemporary culture and lifestyle into another time period.

While the Flintstones live in a world with machines powered by birds and dinosaurs, the Jetsons live in the year 2062 in a futuristic utopia of elaborate robotic contraptions, aliens, holograms, and whimsical inventions The original series comprised 24 episodes and aired on Sunday nights, and, at the time of its debut, it was the first program ever to be broadcast in color on ABC-TV.

Here is the first episode of the Jetsons called Rosie the Robot that premiered 50 years ago tonight.  Note that entire information / internet/ home computer revolution was never seen back then. The opening Parking Valet scene does look a bit prescient though- automated by credit cards.  The huge flat screen television shown in the episode was unimaginable 50 years ago for the average consumer.

For an interesting article on whether or not the Jetson's view of the future has held up 50 years later:
http://www.marketplace.org/topics/life/jetsons-turn-50-have-their-predictions-held