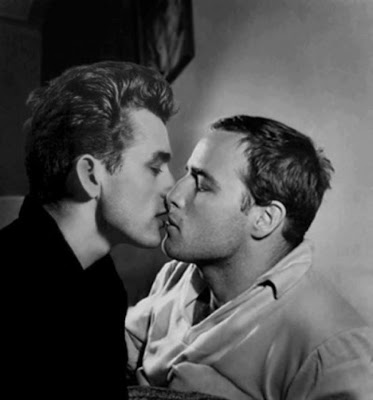 This photo appears to have been faked.

Here is the original Brando photo (unless this one has been altered) of Brando kissing a cat: 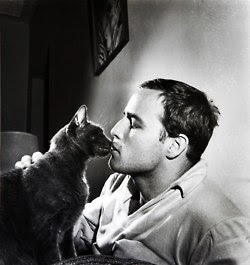 Living, as they did, in very homophobic times, the two actors hid their relationships with men outside of the Hollywood community that knew about their private lives. As the discussion below indicates, Dean and Brando were not alone among prominent gay (or bi) actors then known outside of Hollywood as entirely straight male icons.

We report below what we have learned about these actors, proud, like they were, proud of who we are—gay, straight or bi!

Dean avoided military service on grounds of his sexuality (when asked, he told), but “when questioned” by others, he provided a more nuanced reply, suggesting he was bisexual: ”No, I am not a homosexual. But, I’m also not going to go through life with one hand tied behind my back.” (Source: http://en.wikipedia.org/wiki/James_Dean)

Before Brando, one of Dean’s closest boy friends was his UCLA roommate and screenwriter, William Bast, who later admitted that “their friendship had included some sexual intimacy.” [Source: William Bast, Surviving James Dean (Barricade Books, 2006), pp. 133, 183-232 as cited by http://en.wikipedia.org/wiki/James_Dean]

Dean was among a number of Brando’s boy friends. In his Brando Unzipped, biographer Darwin Porter tells us: “James Dean was one of Brando’s most lasting yet troubled gay relationships. They had a relationship for a number of years but it was always turbulent…. At one point they had a big stand-up fight at a party in Santa Monica, California, witnessed by dozens of people…. His affair with Montgomery Clift was a long and enduring relationship….

Marlon had a bit of a fling with Cary Grant, spending a weekend with him in San Francisco. Cary was also pursuing the actor Stewart Granger, who became another of Marlon’s conquests…. Marlon admired John Gielgud but they didn’t have a relationship, rather, Brando performed sexual favours for Gielgud and told friends, ‘I owed it to him because he really helped me with lines in Julius Caesar.’” [Source: http://www.contactmusic.com/news-article/brando-book-details-string-of-gay-celebrity-affairs_26_01_2006]

Interviewed by Gary Carey for his The Only Contender (his 1976 biography), Brando stated: “Homosexuality is so much in fashion it no longer makes news. Like a large number of men, I, too, have had homosexual experiences and I am not ashamed. I have never paid much attention to what people think about me.” [Source: Keith Stern, Queers in History, (Ben Bella Books, 2009), p. 70 as cited in http://en.wikipedia.org/wiki/Marlon_Brando#cite_note-queers_in_history-40]
Posted by Eddi Haskell at 6:00 AM